I forgot to post a picture of our latest Ruger Precision Rifle rear bag rider plates fresh back from anodising so here is one. 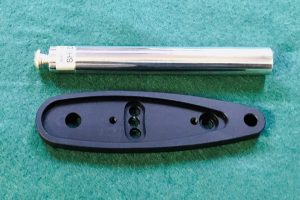 Machined from 6082 aluminium and satin anodised finish they are virtually a direct copy of the original butt plate however they are extended to accept a bag rider tube. You have a choice of either a self colour 1,5mm tube (Shown in picture) This adds around 65,0 grams to the all up weight of your rifle. Alternatively you can have the 20,0mm carbon fibre tube version with polished aluminium ends which is a lot lighter. (Guess who forgot to weigh the last ones he built)

Everyone tells me these make a huge difference to the tracking of the RPR at both short and long distances and coupled with the 6.5CM cartridge gets you into some very long distance shooting.

I also have a single bracket in a lovely shiny aluminium finish if anyone is interested.

I also forgot to add a link to the Ruger Precision Rifle rear bag rider on our site, so here it is:

I am hearing good things from the people who have already received them, it makes me wish I had an RPR myself!

10/12/2019 our Firearms regulations were amended and as well as adding information on the recording of deactivated firearms they also include some changes to the information we as RFDs (Registered Firearms Dealers) need to hold. There are lots of interesting things, however from a dealers perspective the following are of interest to myself.

11. The information to be recorded in dealers’ registers is set out below:

In the case of ammunition, dealers must now also record the batch number.

12. The effect of the changes being introduced by Rule 2(5) is the requirement for all essential component parts (as defined in section 57 of the Firearms Act 1968) to be marked either with the information at (aa) to (dd) or, where an essential component part is too small, it should be marked with a code. In determining whether a component is too small, regard should be had to Commission Implementing Directive (EU) 2019/68 which establishes a minimum font size of at least 1.6mm but a smaller font size may be used for the marking of essential components that are too small to be marked as specified in the EU Directive. This provision is due to be brought into force by 17 January 2020 and will be the subject of a separate Home Office Circular.

13. Any firearm manufactured before September 1939 will be regarded as being of historical importance.

I use a spreadsheet to record all of my firearm and ammunition transactions so adding additional columns is easy enough and for me is going to be:

The term “component part” may be held to include (i) the barrel, chamber, cylinder, (ii) frame, body or receiver, (iii) breech, block, bolt or other mechanism for containing the charge at the rear of the chamber (iv), any other part of the firearm upon which the pressure caused by firing the weapon impinges directly. Magazines, sights and furniture are not considered component parts.

R v Ashton, CA, 1 February 2007 seems to suggest that any part that stops the weapon functioning as it was designed would be a component part:

My view of what is a component part? I was always under the impression it was anything that was pressure bearing within a firearm, so barrel, receiver, cylinder plus anything that a projectile passes through when attached to the barrel etc. I did ask the Home Office about this and the young lady I spoke to advised me they did not specifically use the term ‘Component part’.

So you could decide to mentally swap ‘Component part’ for ‘Pressure bearing’ items which would be a more sensible approach for us Brits.

This could be suggesting a trigger is a component part as are firing pins, strikers, springs and other parts of the ignition system as, if removed, they will prevent the operation of the firearm. Personally, I partly disagree and will not be logging triggers in my register, nor the fiddly little bits. However, as I use a spreadsheet I can easily add columns and have allowed for barrel serial numbers as I serialise those I fit, as do manufacturers such as Accuracy International. I am yet to see a revolver (From memory) with a serialised cylinder however bolts and receivers are fair game and may share only part of the same serial. As an example the receiver could be 1000.001 and the bolt 001

The customer had asked if they could come and watch key stages of the build and who am I to argue even if it is an unusual request. Luckily I know them very well. 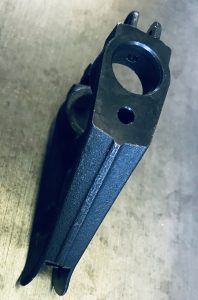 Today was profile the barrel as per the previous exercise, carry out some basic assembly to confirm fit and modify the FSB (Front Sight base) 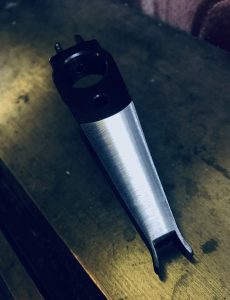 The original XM177E2 had the casting mark ground off on the rear of the base and the bayonet lug removed, so that is what I did. Note the tear drop forward assist on the main rifle picture, I am trying to get a look as close as possible to the original rifle.

The profiling went well although I did opt for a fine finish contrary to the original, I just could not live with the thought of building something that looked like it has been roughed out with a rasp on a Pole lathe…

I need the butt stock to arrive and we can then complete the assembly and run a couple of test rounds through it, then Cerakote and off to Proof. Oh, I also need to complete the muzzle device/sound moderator. I have decided to build it in three options:

1. Standard and 100% correct to the original Colt drawings.

I wonder how many people machined a barrel to the correct M177E2 profile today.

The picture shows the M177E2 11.5″ barrel look and the roll of hockey tape is there to hold the FSB up as it was just starting to rotate under its own weight which I think is a reasonable fit considering it will need painting.

There are probably a reasonable handful of people in this country who profile barrels in house and I do a modest number for ourselves and occasionally others RFD’s, however I always think it is rather special when I profile something out of the ordinary such as this one.

This is a dummy barrel to check the profile of a barrel destined for a Colt XM177E2 replica build, the only difference being the original barrel was 11.5″ in length and this one is 12″ to keep the build within the UK 12″/”4″ laws, or barrel length not less than 12″ and overall length not less than 24″

Why the test run? Well as much as I have confidence in my programming it is always nice to run the part in a soft metal first to confirm fit and this run exposed a tightness where the front sight base (FSB) fits which is annoying as I am good to the original drawing, albeit at the upper end so the FSB must be on the tight side and we have a stack up of tolerances. I will modify my program accordingly.

This was nice to machine as I did not need a steady due to the short length. Cycle time was a very steady 21 minutes and a few seconds and I will need to increase my feed speed on the finished article to leave some machining marks as the original would have had.

Chamber will be 5,56×45 NATO and it will be attached to an A1 upper and skinny hand guard.

Next job is machining the muzzle device which is a flash hider/sound moderator combination.

EDIT – In case you were wondering what an XM177E2 is I have attached an image from http://retroblackrifle.com/ who are my go to on-line reference for such things (Hope you don’t mind guys!)