The venerable (Or not) Cogswell & Harrison single non select mechanical trigger is always interesting to work on. The original patent for a C&H single trigger goes back to 1895 however there were changes along the way to overcome double discharge issues and rightly so. 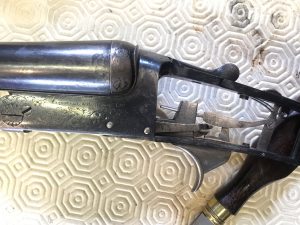 So, some tips for those of you that own and shoot one of these things or aspire to do so in the future. Be firm, the trigger break is going to be around 2.4kgs to 3.2kg or 5 to 7 lbs. which is not bad for a 100+ year old shotgun. You need to pull the trigger firmly and if it does not discharge the right-hand barrel, stop and break the gun and start again, do not pull the trigger again. Yes, you have probably missed the bird however you have also probably just saved the gun and yourself from a double discharge. Obviously, I am assuming you are not shooting with dodgy cartridges that may or may not ignite.

These guns were built with 2.5″ chambers for ounce and an eighth loads, so 32 grams. Please don’t do it! These are light sporting guns and even with an ounce/28 grams they can be quite spiteful to shoot. If your mate has a load of old paper cartridges great, tell him to hang onto them unless they are 2.5″ and even then, be wary. I shoot 2.5″/67mm Eley Impax 28 grain 6’s fibre which seem to work when pointed at most things. I will not shoot anything longer.

I had an old English gun come in during the last season, I had made a running albeit effective repair to it only a few days before so was surprised to see it come back in so quickly. Apparently, it had shot OK but would not break fully, yeah well that is what comes of shooting over length cartridges. The primers had been pushed back on both and the brass had swelled so much it had jammed the ejectors. Easily sorted and after a careful inspection and a few stern words I sent the owner and gun on their way.

Why the issue? Well in simple terms the length of a cartridge chamber allows for the fit of a fired cartridge. You pull the trigger; the cartridge goes bang and the shot column and wadding hurtle up the barrel. A 12-bore cartridge case usually has a star or roll crimp to keep the contents in place, if it is the former the crimp must open up to allow the contents to get out. This means the case gets longer hence the 2.5” cartridge actually being closer to a couple of inches or so in length (Star crimp) when unfired and it is not until it is shot that it gets closer to the 2.5”

You can chamber an over length cartridge in a shotgun chamber with ease, however when fired the case opens and extends into the transition from chamber to barrel which is a taper or conical in shape. This means the cartridge is effectively choked at the end of the chamber and pressures rise incredibly quickly as the wad and shot all try to get through a smaller than usual hole. This is dangerous at best and can lead to missing fingers and destroyed guns so take care to use the correct length cartridge. 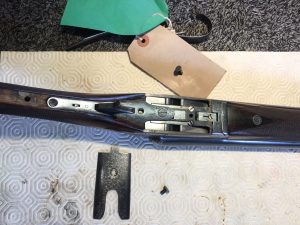 Back to the Coggie, I do tend to put these back together slightly differently to other side by sides. I always fit the barrel first, then drop the hammers, fit the trigger and plate, check operation and finally fit the bottom cover. Here is a tip, the trigger guard is often held in with two screws and they will have been filed to match the profile of the guard and as such will not be interchangeable, so I screw them into the job label in the correct order. It saves me faffing around trying to guess which is which. When you go to look at an old English gun it will have been apart at some point however that is no excuse for not putting it back together correctly. Are the screws correctly timed? 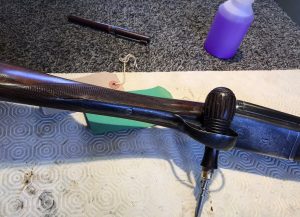 They will have been slotted fore to aft when first built so they still should be, if they are out of line there must be a reason. Now run your fingers over the screws, can you feel any burrs or high sections? Again, if you can it has been apart and not put back together nicely. These markers are an indication of the quality of the work that has been carried out.

It is not to say the work has been badly or well done, I can re-time screws and remove burrs with ease so you just know other people can as well.

The trigger is now sorted on this particular gun and it has had a box or so of cartridges put through it. I need to replace a couple of screws, I will probably remove the non standard lacking and then it is ready to go.

Oh the coloured labels on the gun? Well they buff one gives customer and work details, a green means it will be for sale and a red label would mean on hold or in storage.

And why am I telling you this? Because you need to know.

Some pictures for you:

Just a reminder that the plan continues for us to open tomorrow Monday 15th June 2020, albeit with some new rules in place. I say plan as this is entirely down to our Government and their final decision, however it is looking good right now.

We have a counter in place now, those of you that have visited in the past will know we are quite informal and we are one of the few places where you could walk in through the workshop doors and about the only hindrance was the workshop Labradors and a large container of jelly beans. This has had to change.

With the counter now segregating visitors from the workshop and bench areas I really did think we now had a reasonable barrier for the pups, however the yellow one cleared the counter in a single leap upon first introduction.

We have had words about this… 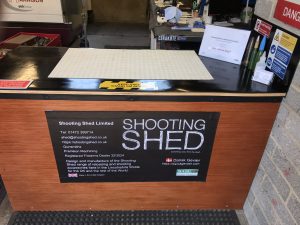 We have hand Gel and wipes available along with anti bacterial surface sprays, we will maintain a strictly one customer only at any one time and a 2m social distancing rule applies.  Hard surfaces are wiped down after every visit.

We have our own risk assessment for those of you that are interested.

We look forward to seeing you all very soon. 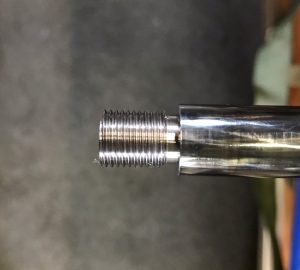 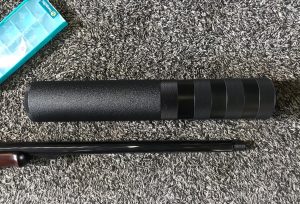 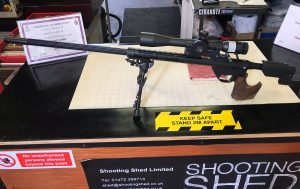