This was as much a test of posting pictures as anything, it is a BSC (bearing Surface Comparator) I built recently for a friend. It is designed to measure the bearing surface of .308″ bullets for an F Class shooter. The bearing surface is the parallel section of a bullet that is gripped by the case neck, precision shooters have noted that when measured this distance can vary from bullet to bullet and can have an impact on bullet accuracy so they measure, sort and batch the bullets by bearing surface length. They are not easy things to make as the accuracy of the device is based upon how closely you can get to the bearing surface, I aim to bore the comparators to .304” this means a two thou undersize variance, any closer than this to the parent bullet diameter leads to problems.
This particular gauge has interchangeable tooling so it can also be used to measure the OAL (overall Length) of a loaded bullet versus a reference piece. My preference is analogue measuring devices with such a gauge but the end user asked for digital.
I have built these for other people in the past but am yet to put one together for myself however I have a couple of idea for improving the device so I had best build one to prove my ideas work… 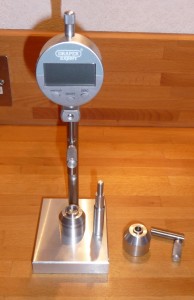 OK, so a V is not particularly impressive and I saw a few hit today at 800 & 1000 yards but they were thin on the ground at 1200 yards, it was bloody windy for Barton Road and decidedly damp as well.I had swapped out the rings on the S&L so I knew it needed to be zeroed. Once my first stint of RCO duties were finished I settled down at the 800 firing point and bore sighted at a flag pole at 400, as I have Apel mounts and rings fitted I can adjust the zero through the rear mount which is a nice touch so a couple of tweaks and it ‘looked’ to be right. Time to try. I use BulletFlight to do my base calculations so I entered the distance and temperature and took the shot, saw the spash so dropped a couple of MOA off and was on the frame, up a bit and Happy days. Now I had an 800 ‘zero’ I could add just under 11MOA at the 1000 yard point. It turned out I only needed 9.125 MOA to get to the V so that was OK albeit a tad strange as BF is usually within 1MOA of the mechanical elevation.BF suggested I need another 14.6MOA for 1200 but that put the POI way high, the good news at 1200 is you can shoot and easily watch the splash, this time I had to drop 3.6MOA to get on the 5 ring. Now I know the MV as I chronoed it end of last year so either my Kahles is not giving what I know to be MOA or I am missing something, this does provoke the question, are Kahles ‘scopes graduated in true MOA or shooters MOA? Either way it does not explain the factor of 1:1.2 I had to apply to the software calculations to get my actual drops. Wind was harsh for Barton Road but not enough to do this.

Anyway, last shot at 1200 was a V finish, considering it was a skinny little 139 grain round shot from a lightweight sporter rifle with a 12X ‘scope and I had been dancing around the 5″ white V Bull for the majority of my shots so in that respect I was pleased.

Ever wondered about the inner workings of an RCO, are they the icemen on the range or an all round good chap?

The plan is to add an entry when I do something interesting, get frustrated when a project goes pear shaped or even find a new read I like. Most of the content of this blog *should* be shooting/reloading/stuff for shooting related but no doubt I will rant on occasion or beam over something. Hell… it is my blog so everything is allowed.