Towards the end of last year I was staring at an absolutely original No32 Mk1 telescopic sight that was sitting on my desk. I was constantly moving it anywhere but back in the cupboard which meant I had to find a suitable project for it. The problem was what, so I mentioned it on the Full-Bore forum and GeeRam mentioned a No32 Mk1 had been fitted to a Pattern 14 rifle. A rifle I own and one which I really enjoy shooting.

So, I hunted down the post, contacted the person who had built it and was told that the source of the drawing was secret and that the bracket build he had commissioned had been a nightmare to do and probably best avoided.

Use the people you know I thought, so I spoke to Paul Whitelam of Northern Shooting Show fame and he waved a magic wand (OK, he spoke to the Leeds Armoury people) and a drawing was supplied, I think it was a fiver and I still owe him for it!

With the drawing to hand first job was to draw it in CAD, it is always easier to work with a 3D model and it soon became apparent that what I had modelled and what had been built previously were really quite different. So I started again and paid extra attention to the job in case anything has been over looked and yup, what I was looking at was spot on to drawing, even down to a couple of small errors on radius paths, but way different to the example that had been built recently. My goal was to build something that was totally 100% accurate.
I could certainly build a fair amount of the project, however it was also apparent that I would need a 5 axis machine, something I do not possess, so I was going to need a grown up on board, certainly if I was going to build a handful of the things.

As luck has it, Robert Chombart of CG fame and I worked with another company when we were building rifle actions a few years ago and they have some fairly hefty CNC kit, so we sat down and talked, in fact we talked a lot and a plan agreed. Time to do some more research, I reckon I put well over 50 hours (I stopped counting last December) into 3D modelling, researching material specification and modern equivalents and this was before the emails, conversations, drawing mark ups and annotations. The master folder alone is over 240 MB and the pile of drawings in the folder is a couple of inches thick. Eventually the project was ready to be kicked off and set tool to material.
The original drawing calls for malleable cast iron and that is certainly an idea for the future however right now my plan was to build a dimensionally perfect replication of the drawing with modern and robust materials which we have done.

Final job now is to tumble the parts and black them. Yes them, we have built half a dozen.

Interestingly, the drawing called for 4BA coned head screws or D.D.(E)2441/5 Screw, Holder and that drawing just happens to be for the 4(T) bracket (Another fiver I owe Paul!) Which makes me wonder why they chose to design a bracket for the Rifle, No3 Mk1 (P14) when the H&H modified No4 Mk(T) was already in place. My personal view is the P14 is an inherently accurate rifle and the one I have would easily out shoot the 4(T) I used to own. The downside was always spares for the P14, plus the ‘limited’ magazine capacity and a whole host of other things. What I do like about this bracket is it is robust, it used 5/16” thumb screws instead of the 1/4” used on the 4(T) and it also dovetails into the rear left wing that protects the rear sight so it has a very solid recoil system, unlike the 4(T)

Anyway, here it is, call it a bit of a world premier. A bracket to hold a No32 Mk1 rifle telescope to a No3 Mk1 rifle, this was originally designed and built in 1940, this is not a fantasy build, this is just a late build. 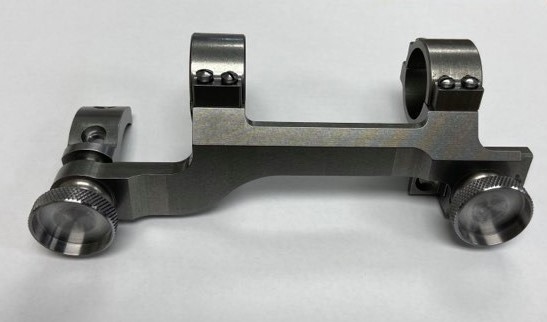 More to follow, in fact I could probably write a book on it!