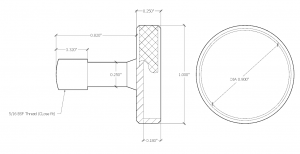 The project continues apace with more turned parts. Again, these will need to be heat treated however at least I get to work with a fairly standard 5/16″ BSF (British Standard Fine) I cannot say I never work with imperial threads as all of the last weeks screwcutting was imperial and the time consuming part is always the clocking in as opposed to the screw cutting itself. Oddly, I do tend to work in metric for some imperial threads and as an example the 20×1/2″UNF thread so often seen on the end of barrels and used to attach a sound moderator starts off as a 12,70mm diameter to me and finishes at around 11,00mm for a class 3A thread (External) I say around as the ultimate diameter is down to the part I am attaching to the end so you could argue it is not really a class A thread.

I am sure some of you have shouted ‘Gotcha!’  confident now that you know what I am making. Good idea in principle however I think you will find this is the wrong thread.

All will be revealed over the next couple of weeks.