The folding single barrel .410 shotgun, I know I have mentioned them before. Normal rules apply with these things if you are in the UK. Is it safe to shoot and equally as importantly, can you legally own it on your shotgun certificate? I say this because so many of these things hover around 24″ barrel length and to comply with our UK firearms law the barrel must be 24″ or greater, not 600,0mm or longer and not 60cm or longer. 24″

OK, so you own one, it is safe to shoot and lawful to own so what can you do with it? Well shoot it of course! Beware as they are usually 2.5″ chamber or less so do not go stuffing 3″ 17 gram loads in it, however as a fun gun for rabbits or barn pigeons and clays of course, they are great.

But what about if it has a barrel less than 24″ in length? Well now it is classed as a Section 1 firearm and needs to be held accordingly.

You can always do something useful with one though. This one came in on a Section 2 shotgun certificate and careful measuring from the breech face to the end of the barrel put it right on the raggedy edge of Section 2. We advertised it for a while however we had no takers so it was left in the Armoury, awaiting a decision. As much as I do like these things I cannot keep every gun that comes in. They are either sold or used, not left in the corner of a cabinet.

Now I have to deal with animals involved in RTA’s (Road Traffic Accidents) I prefer to use a .410 shotgun as they are quick and humane, however walking through a housing estate with a gun over one shoulder in a high visibility vest does draw attention so I decided to haul the .410 out and do something with it.

The plan was to fit a permanently attached sound moderator that would not leave any doubt as to the length of the ‘Barrel’ plus it could be used for humane despatch. First job was to create a suitable sound moderator body and I opted for a cylinder from an Air Arms Carbine air rifle. They fill to 200 Bar (2900PSI) so more than adequate for the job and did a quick mock up to see how it felt and looked.

Nice, time to put the concept into practice.  I machined a threaded adapter that fitted nicely at the correct distance from the muzzle, fitted a muzzle cap to the new body and assembled everything on the gun. Everything still looked good, so the new threaded adapter was silver soldered onto the barrel and everything was pulled apart. I had already scrubbed the section of the barrel that would be inside the sound moderator, so I now drilled a series of 4,2mm holes at 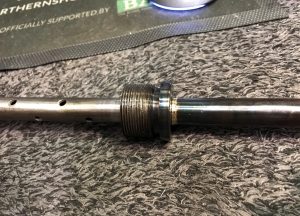 30,0mm centres in 4 rows, offset by 15,0mm. Think of it as opposing holes every 30,0mm at Zero and 180 degrees and two more opposing rows at 90 and 270 degrees with these holes being centred between the other pair. The burrs were removed and the barrel blacked again by hand. 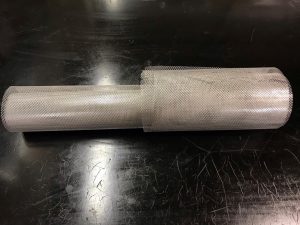 Onto the baffles. I had been mulling over many different ideas and ended up with aluminium mesh from Amazon. A sheet of mesh 3000x500mm costs under £14.00 (October 2020) and is enough for several goes.

As the outer tube is 300,0mm long externally, the mesh is around 250,0mm long. I cut it to length with scissors, then wrapped it tight to the barrel until it just fitted in to the tube and cut it to the length. I then wrapped the mesh back around the barrel and tried to assemble everything and failed as it was unwrapping itself from the barrel. So I wound it into a tube like a rolled up newspaper, pushed into the outer tube where it opened up slightly and allowed me to assemble everything with ease as the hole in the middle of the mesh was plenty big enough to allow easy assembly.

OK, so now I have a folding .410 shotgun that has a 2.5″ chamber and needs testing. Off to our designated test location we went and confirmed it was quite happy with the 2.5″ test loads. I also noted that it was incredibly quiet with a solitary test subsonic cartridge, however only 3″ subsonic cartridges are available here in the UK, so I was obviously going to have to make my own.

Back at the workshop I stripped everything down to clean and carefully inspect and was delighted to not see any signs of damage or pressure as I had expected. So I did some research on 2.5″ subsonic loads, realised the data was not really available so I ‘phoned a friend and he did the load development.

So how does it shoot? Our sound meter tells me a supersonic factory 2.5″ 14 gram cartridge measured at 45 degrees back and at one meter is around 140 dB give or take a couple of dB. With the newly built subsonic loads we saw around typically 97-98 dB. This is with a load of 16,7 grams #6 shot and around 990fps. The load listed above uses no plastic components other than the case itself which can be reloaded several times. 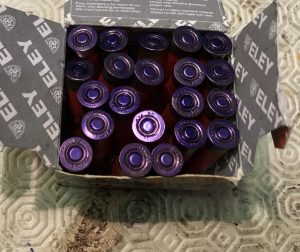 I gave the case heads a wash with blue dye so I can clearly identify the subsonic loads.

What I will say is I strongly believe the sound reduction is down to the cartridges as much as the silencer and oddly, the tension on the crimp is as important as anything. Nick of NB Guns, who did the development tells me he did get some loads down to 700fps with no signs of over pressure so dependant on ambient temperature we can always slow/quieten things down a bit more if needed.

In practice, I can definitely hear the hammer drop at 90 degrees to the gun at 2m with our loads and I doubt you would really know what was going on from 25m away, which is about the length of a tennis court. Have I used it yet? Well I did shoot a clay with it the other day! 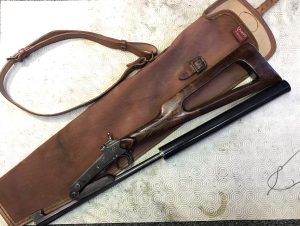 Final job was find something to put it in. We get many guns come in with old slips so I grabbed one from the pile, shortened it to suit, glued the end together with rubber adhesive and stitched it up. So now I can keep it safe and sound and pop it over my shoulder when needed.

Will I be building any more? Probably not. It was a design and build test as much as anything, it was intended to be built to a tight budget and hard cash outlay has been negligible. Instead it was mostly a spare time build, even the testing was added to an existing run out to test customer guns.

Will I be testing the gun with slug? Given the results I doubt I will take things any further. I have a lovely little gun that will serve the purpose it was built for, nothing more and nothing less.