This was walked in earlier today, a Whitaker Special chambered in 7,62mm with the sights removed, a good paint job, the most bizarre stock I have ever seen.

So ugly in fact that I refused to let it leave and it is now safely locked away in the armoury. This is a low serial Whitaker Special so in the first 20% of the rifles Bert built (117 in total) So I am guessing at 1973 or maybe early 1974. I am assured it has a Brindles trigger and I will check in the morning. The trigger is certainly not correctly set-up right now so it needs looking at anyway. I do wish it had come with an original stock as I doubt I will ever find one however I will ask around, same goes for some Brindles sights.

BTW, that stock has been superbly made and I will take some pictures in daylight.

The Whitaker Special Target Rifles were built by Herbert Whitaker between 1973 and 1976. Bert, as well as being a keen target shooter for Great Britain who won his fair share of silverware had also been a chief examiner and prototype advisor for RSAF Enfield and created his rifles mostly but not exclusively from Enfield 4(T) rifles which were heavily modified including conversion to a one piece stock. I will open this one up and document the changes made either in this or a later post along with some more pictures.

So, the burning question, does anyone recognise this rifle?

Bert Whitaker charged £75.75p for this one, which incidentally my register says it has been in Fultons for a service within the last ten years.

David, thank you for this little gem.

No Mick, Thank you 🙂 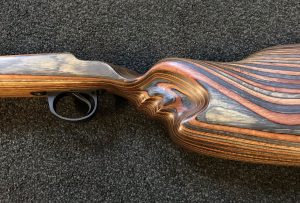 The left hand side of the stock,  the finger inlet is big, even for my hands. The trigger is quite a long way forward however it is comfortable. 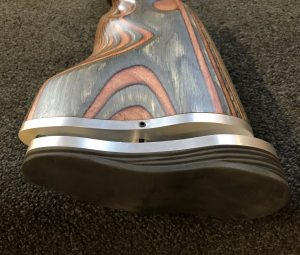 The butt form. Adjustable for length of pull, otherwise it is just plain odd to look at. (left of this image is top) I am quite intrigued by the design, it is actually quite comfortable when held in the prone position and a lot of work has gone into that butt pad. 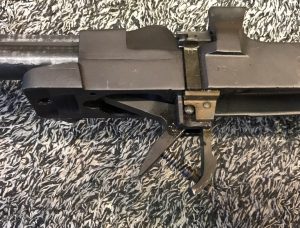 The trigger mechanism. The blade itself is suspended within the stock and one of the two adjusting screws can be seen. I have always been a fan of the Brindles triggers on the P14 and have one on my own rifle plus some spares however this is not a nice trigger. 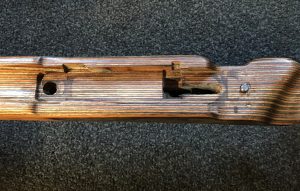 The very basic inlet details. I am surprised the receiver was not bedded to the new stock and/or pillars fitted. 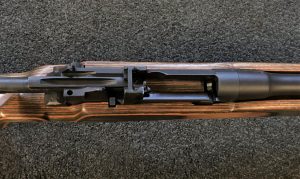 The Action in the stock, the gaps to the sides are clearly visible.

The serial number, Bert’s stamp identifying this as a Whitaker Special #023, the 20 Ton proof marks and the chamber identification which is 7,62mm c 2.015″ which is 51,181mm. The crown over BNP means the Proof took place in Birmingham as opposed to London 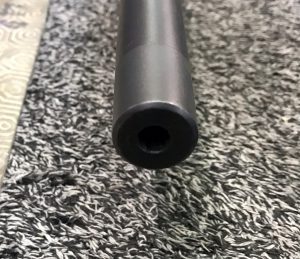 crown job… Originally this rifle would have been fitted with open sights. Someone has removed the sights and sleeved the end of the barrel where the sight would have sat. They have machined to size and it looks like a 90 degree crown, chamfered bore and a filed round to the outer edge. Not the hall marks of a rifle guns smith. I would probably add a stepped or 11 degree crown to such a rifle these days and only use a 90 degree crown for rifles that are threaded for and fitted with sound moderators and even then this is not a given for me.

So there you go, a bit more about this unusually stocked transitional target rifle rifle. Right now my view is fit a no gunsmith ‘scope mount and check it for accuracy at 600 yards. If it can hold better that 2 MOA without load development I will fit open sights and consider that stock and some decent bedding and use it as a target rifle for myself.

If the accuracy fails to hit the mark, well……….