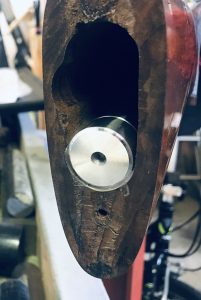 I have just added a balance weight to a Beretta 686 Silver Pigeon. The weight had been previously arrived upon for the owner during an instructed shooting day however the weights were quite rudimentary and tended to rattle around a bit, so he asked me to tidy the job up, normally on a Beretta I would attach a weight to the inside of the butt with a wood screw however I wanted to keep the pre-determined weight as far back as possible so I had to opt for bonding it in place. On a plus side the weight is easily removed if required at a later date, yet will stand up to the recoil of the shotgun. 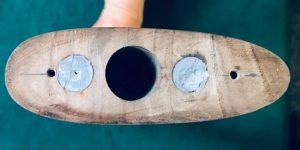 An alternative method is to bore an additional hole, insert a denser material and seal the hole over as shown in the second image which just happened to be here for a service. I personally prefer this method.

This set me thinking, where was the balance point of the Beretta? So I dug out my balance block, popped it in the vice and checked, on this occasion the instructor had opted for a rearwards bias as the balance point it around 5,0mm towards the rear of the pivot pin. This means the gun will be a bit more lively than would be my preference. As an example, my Westley Richards balances at 3-3/4″ to the front of the front trigger so again just behind the pin however it still feels very neutral in my hands with its 14-3/4″ LOP. Given that it has a slightly deeper than normal red rubber butt pad I should imagine it was either balanced on the pivot pin or just in front. 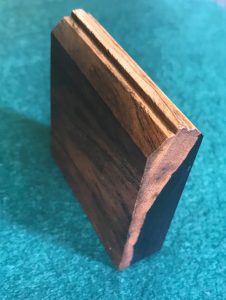 OK, so how to check the balance, well very easily. I have a wooden fulcrum block that I pop into a vice, this particular block is made from a piece of Ebony and the dark and light colours are as the wood transitions from heart wood to the lighter sap wood, it is very hard regardless and has served me well although it is starting to look slightly second hand. I picked up an onion sack (String bag) of Ebony off-cuts many years ago, they had been rough sawn and were a mixture of heart and sap and a couple of the pieces even had holes in that looked suspiciously like something an extremely oversized wood worm would have bored. I will be honest and say I just stick a lump in the mill, square it off with a solid carbide cutter and then machine it to the desired shape. Yes I could do it by hand however it will do nothing for my fine toothed saws or plane irons so off to the Bridgeport it is, the finish is near perfect as well.

This set me thinking, what other lumps of wood do I use, so here is a picture, top to bottom are a couple of wooden blocks that are used to support items such as bolts and receivers when I am dissembling them. These are invariably mostly used for shotgun servicing, jobs such as drifting out pins being a perfect example as the part needs a good solid support and space for the pin to go into. These are sacrificial things as they eventually wear out over 2-3 years, the one on the left is a new model that I have just started using. As ever, these are machined on the Bridgeport as life is too short…

As an aside, I spotted someone selling these  things recently, £25.00 each and looking very much like my one on the right which was originally used to confirm the fit for some sling swivels on a Lee Enfield rifle, I found it interesting that the ones advertised had the near identical oval cut-out. 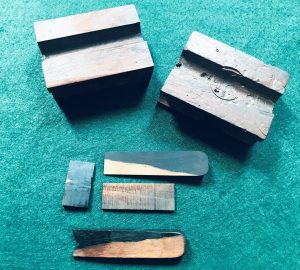 Below the larger blocks are some wedges, again ebony, that I used for raising dings in top ribs. The ebony is hard enough to not deform excessively and I can use a couple carefully driven in from opposite sides to great effect.

Finally at the bottom a hand tool for pushing a spring into place on a shotgun, the make of which I have long forgotten however it still gets used from time to time.

Why am I telling you this? Because you need to know.