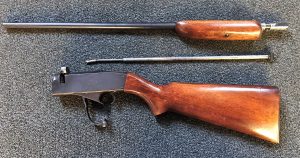 In case you wondered Ralock is an abbreviation for Radial Lock which is a reference to the breech locking mechanism. I will add some more pictures at a later date.

The Ralock is a semi-automatic rim-fire rifle with a blow back breech block design that was apparently based on machine gun development from the Second World War. The interesting part is the enclosed receiver that catches the spent cartridges as they are ejected, so no more hot cases down your shirt sleeve as with the Browning SA22, the downside is when you open the breech with the lever on the underside all of the hot cases go down your shirt sleeve instead of just the one. The lever is also used for cocking the action.

The 8 Shot tubular magazine is filled via the side loading port on the left hand side of the Butt stock a per the SA22.

Being of such a design means showing safe is all but impossible unless you remove the barrel, however you can open the bolt and pass a length of heavy nylon cord through the load port and out of the muzzle, add a small piece of tape as a flag and you are good to go. Alternatively just remove the barrel and pop it into a small rucksack or leg of mutton case.

The actual take down process is the easiest I have ever operated, lift a lever and pull the barrel out, job done. To fit the barrel reverse the procedure and it does not appear to be dependant on the bolt being back or forwards

Construction is incredibly robust with a receiver machined from what was probably a solid lump of steel. The safety is a slide type device as you would find on some pump action shotguns at the top rear of the receiver.

The barrel looks to be around 24″ long and the front sight is noticeable by its hight, this rifle is particularly nice as it has the majority of its original finish and has not been screw cut for a sound moderator or had the receiver drilled for a telescopic sight.

The trigger is reasonably light and crisp and the moving parts are removed by first dropping the barrel off, then pulling the front of the bottom trigger guard down and out it pops. You need to remove the magazine follower first and this is secured and removed form the rear of the butt.

I suspect it will take less than 15 seconds to remove the magazine follower, barrel and trigger set and about the same to replace it which is probably quicker than the Browning SA22 of the same era, plus the Ralock feels a lot more robust and lacks the potential fiddly barrel head spacing mechanism of the Browning.

It needs a good service and it can then head out to the range for a test firing, I will report back on that later.

10 Replies to “The BSA Ralock”