Firstly I feel I should point out this is not a definitive historical article, it is simply a few words on a new to me rifle. Shooting for me is so many things including, owning and understanding a rifle and its origins, plus the history and mechanics of the design. This means I will detail some of the more interesting points and might even skirt over some of the general history of a rifle model however this is about the rifle I have in my hands right now.

OK, well that is the disclaimer over, so what is this ‘new’ rifle?

This is a USA produced rifle dated January 1943 and was the final iteration of the M1903 Springfield. There was a later ‘sniper’ variant the 1903A4 and National Match (Target) variants however as far as the battle rifle go this is the last model 1903 variant to be built.

This particular rifle was built by L.C. Smith & Corona Typewriter Co. of Syracuse, N.Y. who were better known for typewriters. It is is not unusual for companies to diversify in times of need and Smith Corona also produced fuses and cipher machines during the second world war and lets face it, if they could build typewriters quality should not be a problem and the Smith Corona 1903A3 had a very good reputation for build quality and accuracy. This particular rifle being the A3 variant differed from earlier models in several ways however the notable changes were centred around cost and material saving and speed of production (Not at the cost of quality) So a new rear sight, the forward mounted and complex leaf sight being replaced with a low profile rear peep sight which gave a longer sight radius and was less prone to being damaged. Some of the metalwork moved to pressed from milled and the finger grooves were discarded. This particular rifle is fitted with the small bow trigger guard, otherwise it was a typically robust 5 shot Springfield rifle.

The 24″ barrel is chambered in 30-06 Springfield with a 6 groove SC marked barrel. The 6 groove is fairly unusual and would have been supplied by High Standard in the early days of production before the move to 4 groove and a few 2 groove towards the end of ’43. I have read that only 5,000 6 groove barrel were available at the start of production however being a January 1943 build this rifle is a bit further on in the build numbers 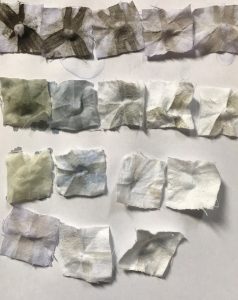 The 24″ barrel is free floating and this particular barrel is scarily good, as I was writing this article I also cleaned the barrel. My normal cleaning regime for such a rifle is Methylated spirits first to remove any oil and dust followed by the tried and tested C2R process inter spaced with a few cups of coffee.

Top row is the Meths and you can see the dust and dirt. Second row is C2R for around 45 minutes as is the third row. What was immediately apparent is there was no copper fouling as such, nor lead fouling so it is not as if the rifle was shot in civilian hands with cast bullets. The fourth row is the final patch out and finish with Meths prior to oiling and I have to say the 6 groove barrel is squeaky clean and as bright as the day it was produced. One thing that I immediately noticed was just how smooth the patching process was. I have cleaned a lot of rifles in my life and can often tell the condition of the barrel as the patch is pushed through and this is about as good as it gets. 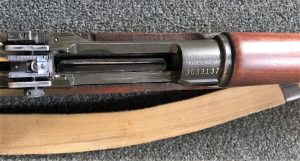 This does make me wonder  exactly what the history of this rifle is. The finish is the normal Parkerised receiver and metal parts with the exception of the  blacked bolt. The wood has possibly been very lightly sanded however the stamps are readily visible, the bore as mentioned is as good as it gets and the stamps have been whitened. Now I do see whitened stamps quite often on older rifles, chalk is usually used however the stamps on this rifle have been paint filled very neatly. The rifle came over to the UK from the USA in 2012 according to the UK Proof stamp and has been in private hands ever since, I had known about this rifle for a while as it was in the hands of a friend. It would be interesting to find out a bit more of the rifles ownership in its later USA years, something for a bit more research one day.

The bolt is missing the later ‘X’ stamp however it does have the number ‘1’ on the underside of the handle, so confirming it is an early production item however the Parkerised ‘shroud’ is not something I have come across before. Having said that the Parkerised finish does match the rest of the rifle. 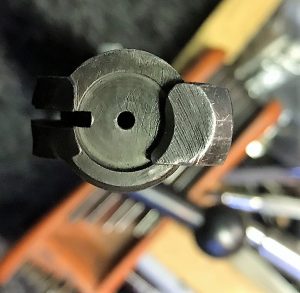 The blacking is remarkably good and the picture does not do it justice and the bolt face is pristine so I am beginning to wonder just how much work this rifle has seen in its last 75+ years.

The rifle has a Parkerised nickel steel receiver and parts with a blacked bolt as normal for the SC.

The magazine cut-off to left rear of receiver in about the same place as the K98 Mauser and in keeping with the Mauser this also acts as the bolt release in the middle position.

The rifle is fitted with a NoBuckle 1 1/4″ buff canvas sling (Correctly fitted!) and I have so far resisted the temptation to swap it for a leather M1907 sling so often seen on Springfield rifles.

As far as wartime use the 1903A3 saw action with the US forces throughout WWII, and saw action during the Korean and Vietnam wars.

The sight protector is un-stamped however it looks to be the correct era as opposed to one of the numerous reproductions available these days, front sight is a blade and I believe it can accept 5 different height sight blades if a change of elevation for zeroing is required. I may need to replace the blade when I decide on the final load for the ammunition I will load. I would have liked to have duplicated the M2 Ball of the time however I no longer have any 150 grain flat base projectiles and sourcing some is going to be interesting. I may end up using the SMK #2155 155 grain Palma although the 175 grain SMK is also an option.

OK, so a great little rifle, what is wrong with it? – Well surprisingly little as far as I can tell. Yes the Parkerised sleeve is unusual, is it a Remington? That possible light sanding to the stock and the front sling swivel screw is wrong so I need to source a new one to correct the issue, other than that, oh and I have not shot it yet, the whole package looks to be very nice and I am delighted to have got my hands on it.

Finally a brief comment on the M2 Ball ammunition that was originally used with this rifle.

M2 Ball utilised a 150 grain copper over lead projectile and there was also the M2 Ball (Alternative) again a 150 grain projectile however it had a steel metal jacket with copper gilding and was a cost saving variant produced from 1943-45. You can easily tell if you have the M2 Ball Alternative as the projectile is easily picked up with a magnet. 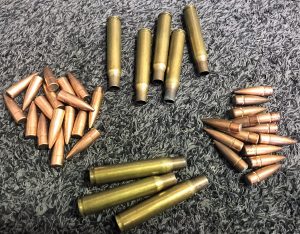 Some examples: On the left is M2 Ball and to the right is M2 Ball Alternative with the following head stamps:

Unfortunately these cases and projectiles had been pulled before they got to me so I am not sure if the M2 Ball Alternative was LC or DEN produced.  Right now I am leaning towards the Lake City however I could be very wrong. Something to research at a later date.

On a final note, I know I have many readers from the USA who undoubtedly know far more than I do about such rifles so I would be interested to hear any comments/corrections or observations.