What a week, I have no idea where it went however things went out and things came in so I guess normality continues. The range of things that come in for repair never cease to surprise me and even now after many years of working with firearms I am still learning. The other day I had a front sight of a Ruger Redhawk fly off, when I inspected it the platform had been glued to the barrel however closer inspection revealed that is exactly how it comes from the factory, the only difference being this revolver had been re-barrelled at some point and the front sight stuck on with an epoxy rein. It is now held in place with JB Weld which should do a better job.

This morning was trigger adjustment time on a 22BR that is unusual in that it is built on a Carl Gustav Mauser type action bedded into a blonde PH Cadet stock with additional beech spacers and I must admit it looks pleasantly unusual. The trigger is a Timney which had been set to around 4.5lbs/2kgs which was just too heavy so I have set it to 750 grammes which although still heavy by BR Standards is more than adequate for vermin shooting and the 1:14 20″ twist barrel which the bore-scope showed to be in remarkably good condition should work well with bullets in the 50-55 grain range.

The rifle was originally built by Norman Clarke and he can certainly put a good rifle together, it was later refurbished by TVR and has come to us to be sold.

As well as the trigger I also stripped and cleaned the bolt, polished some of the internal surfaces and put a slightly lighter spring in so next job is to test it.

The ‘scope is a massive IOR 6-24×50 IOR with illuminated reticle. I believe they are fitted with Zeiss Schott glass as standard and this one came off the Viking’s 22C (22-6,5×47) which she used for 1000-1200 yard stuff so I know it works well. I will get it out for a test firing some time in the next few days. It is provisionally spoken for however I rather like it so it will have a new owner over the next few days regardless of what happens 🙂 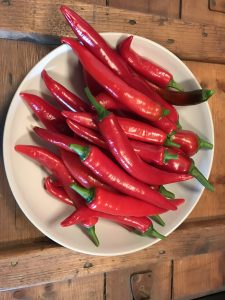 I picked a good handful of Chillies this morning and they are now in the dehydrator, it is the first time I have tried drying them in this manner and I am cautiously optimistic as they do appear to be drying out nicely in a quite corner of the workshop. These chillies were marked up as ‘Fire Ghost’ which I suspect is a made up name however they are pleasantly spiteful and we should have enough with what is still on the bushes to keep us going right through until this time next year.

Today is a combination of work and reloading as I have a load of 6,5-284 brass to stuff full of powder for some load development plus some 6,5×47 that needs to be put through the LEM stainless steel tumbler and on a plus side I can probably dry the cases in the dehydrator, let’s not mention it to the Viking though!

2 Replies to “Rifles and Chillies”