It was snowing outside and 7C inside the chapel yesterday morning and despite stoking up the stove the temperature refused to edge much into double figures so out of desperation/boredom we headed out across the fields with the dogs, 90 minutes later and covered in snow we returned to a chapel that felt positively toasty at around 14C so my tip for those of you working in a cold, draughty and uninsulated chapel is take the dogs for a walk and it will feel so much warmer on your return 🙂

There are of course advantages to this time of year, the fields were frozen Saturday so a days beating meant clean trousers and Wellington boots at the end of the day and my fingers did warm up eventually. The Labrador was booked out for an afternoons picking up on a local Duck shoot and apparently enjoyed himself even though he spent as much time crashing through the ice after downed birds and on dry ground by the sound of it.

Regardless of his activities he was certainly up for the following days cold walk and the Lurcher certainly enjoyed the snow. 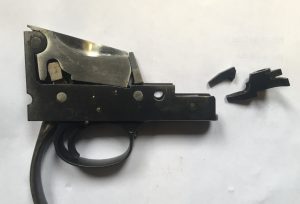 International. The replacing of the part is simple enough, however sourcing a spare is not quite as easy and they are quite pricey as and when you can find them.

We do keep a few International spares on the shelf however our stock is steadily dwindling and I have recently been quoted more for a single part than I have sold complete rifles for in the past. The alternative is to buy complete rifles and break them for spares however this is simply something I cannot bring myself to do a it goes against everything I believe in.

Interestingly I have been asked on a few occasions if I can make some spares for other owners, sadly the answer is I probably will not be doing a run. They are fiddly little things, require vacuum hardening and possibly grinding and as such would end up as costly items and as much as I like to put old rifles back on the road I am not overly keen on having a dozen or so spares sitting on a shelf for the next three years, so sorry about that all of you that would like to keep a spare just in case.

I am in the middle of a run of Ruger Precision Rifle cleaning rod guides and was a tad surprised to see an order for a .223 Remington variant. A quick check by the Viking confirmed they do indeed exist and have done so for a while, I would consider the .223 Rem a worthwhile addition, and no doubt it shoots as well.

2 Replies to “A BSA International ‘Back on the road’”