Now here is something slightly different, a Manufrance Rapid. A 12 Bore Pump Action shotgun (Section 2 Three Shot) with a 28″ fixed choke barrel that arrived over the weekend.

First impressions are it is very similar to the Remington 870 however it has an aluminium receiver and the slide release is a central round button just in front of the trigger guard. I also noticed it rattles like a Mossberg and there was some movement in the barrel where it locks into the receiver, even with the bolt forward so time for some investigation.

Strip down is remarkably simple, unscrew the front locking ring and slide the barrel out. Pull the slide forward and out pops the bolt assembly and you are ready to clean and inspect. The trigger group is held in place by a couple of pins which can be pushed out making everything easily accessible. 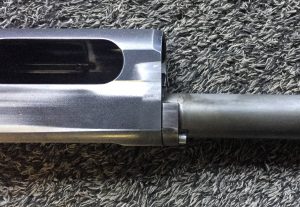 During inspection something immediately caught my eye, the magazine tube is held in place by two m4 screws that retain a pinned block and the screws were lose which meant the tube was wobbling around, one screw was slightly graunched so I tidied it up in the lathe and re-assembled and the tube locked up snugly, once back together the barrel was now held securely and all movement was gone, in fact the gun no longer rattles. In fact there is absolutely no excessive movement anywhere and it cycles incredibly smoothly for what is an obviously well used shot gun probably from the 1970s.

A check with some dummy cartridges confirmed it cycles and ejects satisfactorily so the next job will be to test it – I do like Pump Action shotguns so I am looking forward to putting a few cartridges through it at some point.

EDIT – We had to head down the range to test fire some rifles so the Manufrance came with us and did not perform as well as I had hoped for, the extractor had moved slightly and was sitting in front of the plunger however that was easily rectified, it also did not feed from the magazine if cycled rapidly however all was good if it was cycled reasonably slowly and deliberately. I will strip it when I get a moment and take a closer look. I suspect some light lubrication will probably do the job and will confirm this later.