We do a lot of work on modern rifles however they are modern and many of my readers have probably either come across them or even own similar. Older rifles are a bit different and even something like this, the Savage Model 99 with over a million examples produced is quite unusual here in the UK.

Designed by Arthur Savage at the end of the 19th Century the Savage Model 1899, later to be known as the Savage Model 99 was a bit of a revelation. It was an under-lever however it was fitted with a rotary magazine which allowed spitzer (Pointed) bullets to be used. More traditional under-lever rifles had a tube magazine slung under the barrel which called for round nosed bullets to prevent a chain fire under recoil. Also the Model 99 was hammerless which means there is less chance of snagging a hammer on clothing, the side of your horse or on undergrowth. Arthur had hoped to win a significant military contract with the rifle however it was not to happen. Despite the lack of initial military contract around 1,000,000 Model 99 rifles were produced. Interestingly Arthur also designed and patented the Radial Tyre in 1915 so even if you have not heard of him you have probably taken advantage of his technology.

This particular rifle is chambered in 22 Savage High Power, more commonly known as the 5,6mmx52R here in Europe and yes that is a tad bigger than 5,46 and accordingly uses a .227″ bullet as opposed to the more readily available .224″. The 22 Savage H-P designed by Newton (Charles not Isaac) was capable of moving a 70 grain bullet at 2800fps way back in 1912 which is impressive. The 5,6mmx52R was used by many including allegedly by WDM Bell and this is the very first tenuous link that made this rifle so attractive to us here at the SHED, we already have a .256 Mannlicher that was much loved by Bell for culling of Bull Elephants, right up until the point at which he had ammunition issues and dropped the Mannlicher on the spot and ran off with a Rigby (If my memory serves me correctly) 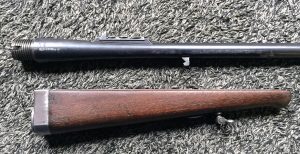 Back to the rifle, it is a take down variant (Second tick in the box) I have a thing for take down rifles and the Viking likes Under-levers so best of both worlds, add to that it is chambered in a 22 and she shoots a 22 Wildcat named after herself and finally it is a Savage and they are quite fine rifles and again the Viking shoots one as her long distance rifle.

The Savage Model 99 is reasonably heavy at 7.0lbs/3,12kgs however it is perfectly balanced and has some lovely features with favourite being the brass rotary magazine round count that is shown through a window at the front left hand side of the receiver so you can instantly see how many rounds are carried, there is also a cocking indicator behind the bolt in the form of a small round pin that pops up when the bolt is closed. The take down process is remarkably simple, slide the catch on the fore end and the wood slides off, you can confirm its origin by checking the number crudely stamped on the inside of the wood versus the serial on the underside of the receiver. The barrel has a full length and interrupted thread and the fore end features a key on the inside that aligns with a corresponding slot cut out on the outer edge of the barrel and receiver, align the two and the fore end goes on perfectly and if the barrel is

slightly tight there is a square notch cut into the underside of the fore end that can be used to assist the removal of the barrel by slipping it over the catch on the under side of the barrel. I will add a better picture at some point to demonstrate this.

The rifle has a 20″ barrel with an integral front sight with blade, there is absolutely no chequering or engraving on the rifle and it has a straight necked stock so it is remarkably simple. Overall length of this example is a tad under 40″ with a 13.5″ LOP.  Rear sight is an express type graduated at 200 yards with further blades for 300, 400 and 500 yards.

Initial research would suggest this rifle is from the early 1920s however I do need to confirm this, I also need to get it stripped and give it a careful inspection and service. So far I have not done much more than to peer closely at the bore with a bore scope and I was actually quite surprised, there is indication of fire cracking for the first inch or so however after that the bore is remarkably good, certainly if you compare it to my 22-250 Sako 75 which has a severely fire cracked bore for a good few inches and yet still holds better than one inch groups at 100 when checked for zero.

All in all an interesting rifle and I have a feeling it is already spoken for, we really do need to get it cleaned and load a few rounds for it and as luck would have it I have some brass and dies so hopefully I will find a few minutes over the weekend. 🙂

EDIT – I had been pondering over how to de-cock the rifle without having the firing pin smack forward onto and empty chamber and it suddenly dawned on me, just depress the trigger as you are raising the lever and you should be fine. Do remember check the chamber is empty before doing this!