The Viking gave the Manufrance a good clean for the last part of this afternoon and it certainly seems to cycle a little bit easier now.

This is the ‘Rapid’ stripped and it still vaguely reminds me of the Remington 870 however there are some significant differences and given that the design of the majority of the mid to late last century Pump Actions are all reasonably similar I guess it could be anything although it certainly is not based on a Mossberg or Stevens. Apparently the French company Manufrance created a Rapid-type shotgun in 1958 which ended production in 1980 although I have come across a suggestion that it was briefly introduced again a few years later. 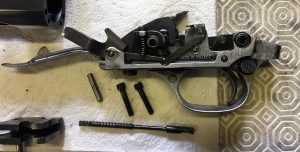 One thing that is not similar to the 870 is the trigger plate assembly which is clearly marked ‘Made in France’ and is cast from soft metal,  this image shows the central forend release button which in its ambidextrous form is rather handy regardless of which shoulder it is shot from, what is not so handy is the spent cases ejecting across your field of view if you are shooting from your left/weak shoulder. I had considered giving this a thorough strip and a coat of OD Green Cerakote however it seems a shame to remove the patina and scratches of possibly 50 years of use so it will stay as it is. That reminds me, if anyone has access to the Manufrance serial number database I would be interested as it would be good to know how old this gun actually is, my guess is late 60s however I could be quite a bit off.

I have a Anschütz rimfire that has been in for a service and inspection (Probably one of the filthiest rifles I have ever worked on) and now that is done it needs test firing and zeroing so I suspect the Manufrance will be coming out again for a few shots to make sure it really works as it should.

One Reply to “A bit more on the Manufrance Rapid”