What an odd start to summer we are having, last week I was getting sunburn, this week we have lit the stove in the workshop and I have mostly been working with a sweater and coat in the mornings. A typical British summer I guess.

We have managed to escape a couple of times recently and our chosen haunt is the Salt Marshes to the east of us. I always check the tide tables before we head off so we know what to expect including flooded car parks which lead to muddy dogs which means Defender time or low tides and low water in the creeks which means incredibly muddy dogs and again time to take the Defender.

With the onset of summer things are really coming to life with the Samphire showing its head above the sands and the marsh full of wild life and colour, this image was taken a couple of weeks or so ago and when we visited this evening the Marsh was a purple/mauve haze of Sea Lavender with the Larks shrilling away above our heads. 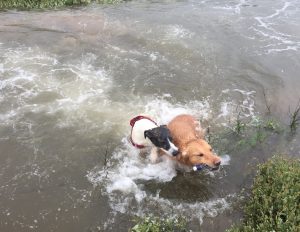 Chose the right time and the dogs get to have a good swim in the creeks and on this occasion I found a discarded plastic water bottle which made an impromptu dummy for the Labrador, the Lurcher eventually had to get in on the act and it was not until I got home and looked at the picture that I realised the Lurcher has latched onto the Lab’s right ear. Charming I thought and I did bring it to the attention of the Viking who is the keeper of the White thing, in typical Danish fashion she said ‘Lovely, he is a rascal’ and returned to her book. 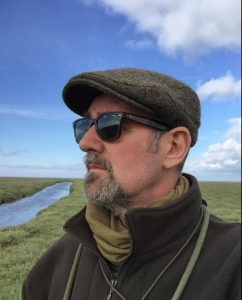 Something I tend not to do is post personal pictures however I thought this one summed up our summer perfectly. Blue sky, sunglasses and a flat cap and scarf because it was quite chilly at the time. As ever I have a dog whistle around my neck plus a leash so people will think I am vaguely in control of something canine. See above picture and you will understand there is some doubt in this statement when it comes to dealing with the Lurcher which is why I tend to prefer the steadier traits of Labrador who are born half trained. Having said that the Lurcher is quick in the water and will retrieve when it suits him however he tends to rush towards me with whatever it is in his mouth, hurtle past and drop it a stride or two further on.

Yes I know I am going grey and I will officially be changing the description of my Journal later this year in keeping with growing old.