We were out and about viewing rifles many years ago when I spotted a Steyr M1903 ‘Butter Knife’ Mannlicher–Schönauer Stutzen chambered in the superbly elegant 6,5x54MS cartridge and both the Viking and I will instantly taken by the sheer beauty of the rifle. Sadly the rifle was sold which was probably a good thing at the time. From time to time we still talk about the rifle and I have always held the idea of owning one in the back of my mind.

All of a sudden I received a ‘phone call, could I supply ammunition for a .256 Mannlicher, well yes I am sure I could however it would be good to check the rifle first of all so it arrived a couple of days later. I had been expecting the somewhat obscurer 6,5x53R however a quick check revealed that the rifle was in fact chambered in the rimless variant, the 6,5x54MS. At this point you might be wondering how you can tell the difference without access to gauges or brass, very easily really, you could always make a chamber cast with wax or low melting point alloy, or alternatively does a .303 British or .308 Win cartridge fit the bolt face? They are good approximations for the rimmed and rimless cartridges the Steyr M1900 and M1903 were usually chambered with. A careful measure of the length of chamber to the shoulders is also a reasonable indication and if there is still some doubt make a chamber impression.

With the owner of the rifle gone and the rifle safely locked away in the armoury I set to the task of sourcing some factory ammunition and once a source had been confirmed I sat down wit a coffee and mused over the chance opportunity to handle one of these fine rifles again after such a long time. To own one would be something rather special so I did some searching and identified an M1900 chambered in ‘.256 Mannlicher’ however a quick call soon confirmed the rifle was in fact the rimless variant however it was also provisionally sold and eventually it transpired that no amount of discussion was going to change things so somewhat disillusioned I went back to searching and it was at this point that the Viking pointed out another possibility.

A possible candidate in Scotland however without pictures although the shop did eventually manage to get some pictures up so I knew what I was looking, they also said the bore was looking a bit grim which left me wandering if this was such a good move until l looked a bit closer at the somewhat grainy images and spotted a thin vertical silver line through the stock just in front of the receiver. Jackpot, a take down model (Have I mentioned just how much I like any form of take down rifle?) We discussed a few further details and I asked if there were any identifying names on the receiver, yes there were. Steyr Modell 1900 on the front ring and George Gibbs Saville Row on the top of the barrel.

That was the clincher for me however there was still the matter of money so the Viking was called in, what was her opinion of the rifle and its value, I must admit to trusting her judgement in such matters as she usually has a keen grasp of market values of the more obscure sporting rifles. Her opinion was exactly half of the asking price however nothing ventured nothing gained so I suggested the price and the shop said they would check as it was a commission sale.

A few minutes later and the deal was agreed and we agreed to have the rifle collected by our courier after the weekend and here it is:

You can clearly see the take down point in the forend which is removed by removing a single screw at the front underside, the front section is then lowered at the front and pulled 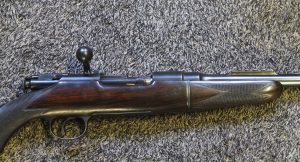 away from the main stock section to clear a small alignment pin. I am yet to remove the barrel, something for a spare moment as we are still flat out trying to fullfill all of our customer orders in the run up to the Christmas break. 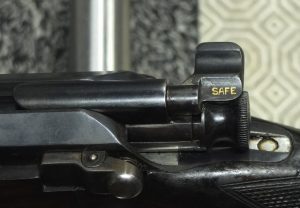 One feature that caught my eye is the gold ‘SAFE’ lettering on the safety flag, a subtle touch, also I noticed a very fine vertical line at the front of the 100 yard express sight to draw your eye to the gentle V shaped cut-out, the front sight is a very fine white bead of unknown material, I will need a magnifying glass to see that one!

Something I had doubts about was sourcing ammunition and reloading components for the 6,5x54MS however I very quickly sourced some new Norma brass, a bag of twice fired RWS, both RCBS and Hornady dies and a couple of hundred Hornady 160 grain .264″ round nosed bullets so that is everything covered, I have a good selection of powder here and will probably start with a moderate load of Viht 160 keeping MV’s to sensible levels and work up using the sights to tell me when I am in the right area.

EDIT – The rifle taken down.

2 Replies to “The Steyr M1900 Mannlicher–Schönauer”