I seldom write reviews of third party products however a stack up of events led to me having to order a Lyman E-ZEE Prime and these are my observations. Firstly why a new primer tool? Easy answer I have misplaced my RCBS primer tools…

When we moved to the Chapel everything reloading related was carefully boxed up, labelled and transported here. As reloading was low on the list of priorities the boxes were stored in a corner ready for the day when we get back to reloading. Eventually that day came and as the reloading area developed things were put in place. The first press when back in, a Lee Cast Classic I mostly use for mandrel operations and wildcat cartridge case preparation.

I initially had a few .303 cases to prime and for these I mostly use an old Lee priming tool, these are great little things however they use non standard shell holders hence I tend to only use the Lee for this operation and for all other cases I use RCBS Priming tools, one for Magnum bolt face cases, one for .308 Bolt Face small rifle primer such as the Vikings 22-6,5×47 and one set up for .308BF larger rifle primer for most other things.Each of these RCBS tools has been worked on to give a super slick and repeatable process and I even fitted mechanical depth stops however these days I prefer to do things by feel. We do not currently shoot anything with a .223BF.

There came a day when I needed to prime some 6,5×47 cases so I went to grab the RCBS tools and could not find them, this resulted in a complete day opening boxes and checking and gave us an opportunity to do some more organising however the primer tools did not surface. Now I am determined to hunt down my RCBS primer tools, if it was just one I had lost I might have written it off to experience however to loose three must mean one of us put them ‘somewhere safe’ during the move.

I still needed to prime some brass so I order a Lyman E-ZEE Prime tool which arrived yesterday just in time for me to prime 250 .357 cases. I have used a variety of priming tools over the years to prime countless different cases in both small primer and large primer so I would like to think I am reasonably experienced however things did not go as well as I had hoped for.

You can read my full review below or simply skip to the last paragraph for the summary. 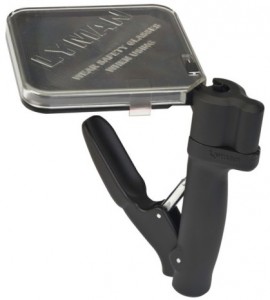 First impression of the Lyman E-ZEE tool is it is quite chunky and appears well made and noticeably heavy, the sort of tool that would probably bounce if dropped and then carry on as before.

Easy enough, so I dropped 100 small pistol primers onto the tray, gave them a rattle to turn them to the correct orientation, popped the lid back in place and assembled the tool as explained. Hmm…  a couple had turned over, not sure how that happened, maybe the lid pinging back in place bounced them however this was not a problem, I simply removed the tray cover turned the errant primers over and replaced the lid carefully, all was good so I started the priming process.

First thoughts were crikey, you need big hands for this tool, I have quite a large finger span and I still noticed the length of grip required to get your fingers around the lever whilst holding the tool. I mention this because if you have smallish hands you are definitely going to struggle.

Prime, prime, prime, WTF this one is tight, so tight in fact that the case will not come out, so I dismantled the tool to remove the shell holder and case and peered into the bottom of the shell holder to see a primer jammed in on it’s side. Safety glasses on I used a flat bladed screwdriver to deform the primer enough to remove the case from the holder and started the process again. After more jams and primers flipping I took to using the tool permanently dipped down with the primer tray tilted up so the primers are effectively gravity fed. Downside is it is not possible to see how the primer is orientated plus there is a risk of flash over if one primer should ignite however as I have never popped a primer in my life I decided to take the risk for the sake of operation continuity.

By this time the Viking had taken to inspecting the primed cases to speed things up and she soon returned one with an inverted primer, something I can safely say I cannot recall ever happening with any other priming tool. So I made sure the primers were all correctly aligned and gave the tool a light rattle, some of the primers turned over….

Worse still primers seem to have a knack of turning sideways in the gate necessitating the opening of the tray to re-orientate the primers before carefully replacing the lid. I carried on and managed to prime some 250 odd .357 Magnum cases for the Viking’s Marlin however it was a faff….

Summary: In simple terms, the Lyman E-ZEE primer tools is well made however it is let down by excessive hand span requirement and a tendency for small primers to flip in the small primer tray during use. No doubt I will continue to use it however I really hope we find our missing RCBS Primer tools very soon…