I received a Tikka T3 .223 Magazine in the post yesterday, a very smart looking thing carefully wrapped in bubble wrap and boxed ready to use. Just one small problem, the magazine is very limited when it comes to the OAL of loaded rounds, the bottom line is you cannot feed a round built to full length from the magazine which means you either single feed, or buy new bottom metal and magazine to suit, or modify the magazine……

Now bearing in mind these things are made of what appears to be a hard plastic and taking into account the cost of a replacement or the alternatives I could see this was going to be a very interesting project.

First job is pop the follower and spring out and then split the magazine which comprises of an upper section and base, a careful lever or two with a screwdriver (Cringe moment #1) and the whole lot was in pieces on the bench. The upper section has a wall in it which acts as the rear stop for the bullets and it needs removing, this involved some careful sawing with a hacksaw blade and a final clean up with a Dremel type tool. (Cringe moment #2) I tend to look on such tools with contempt however I do own something of the same ilk although mine came from a store in DK for under DKK50 (Around GBP5.50) The ‘Danskdremel’ actually did the trick and I could now fashion a new rear stop block so armed with some rough measurements and a suitable lump of 6082 T6 I retired to the Mill.

The idea was to fit a block that kept the spring and follower in the same position yet allow a new OAL of 2.550″

Here is the block machined to size, you can see the three parts of the magazine including the clips that hold the uppers and lowers together. 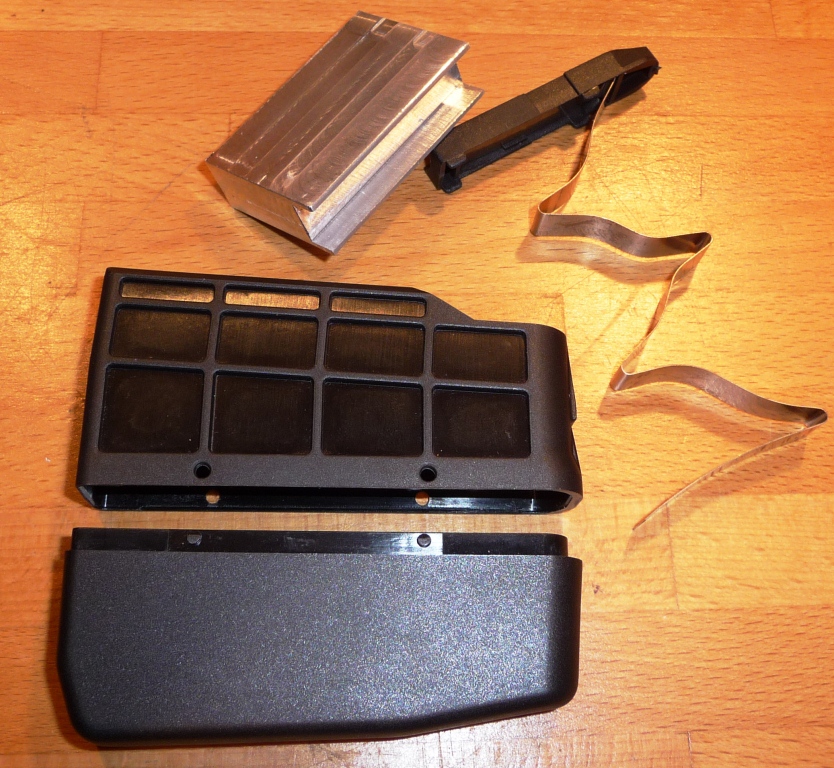 The view into the upper half with the block tested for fit: 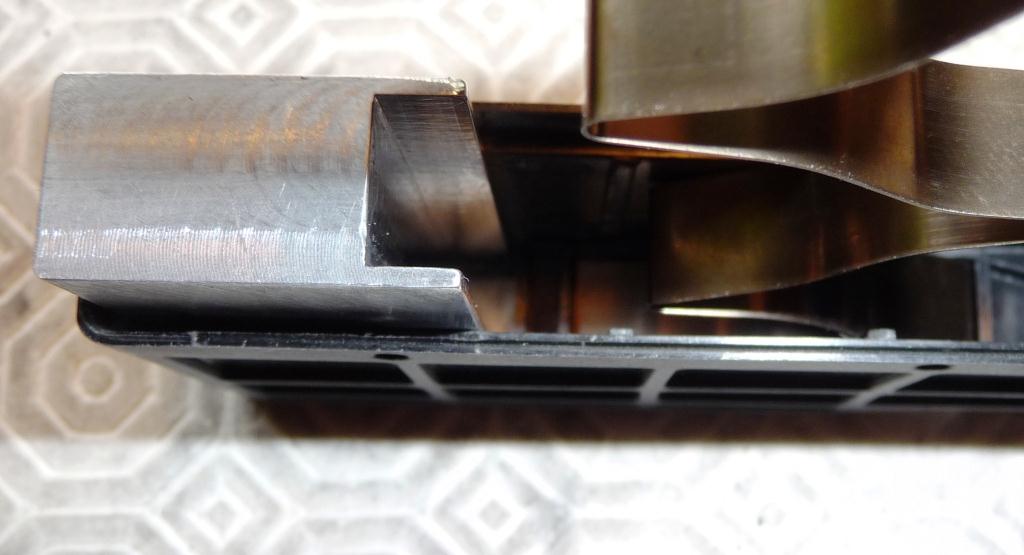 Next job was mill the lower web back by 17,5mm so the new block would fit in place and be supported, as far as I could see the only neat way of doing this was in the mill with a long cutter, so the lower was wrapped with masking tape and locked in the vice ready for the first cut (Cringe moment #3) Did I mention the Tikka T3 plastic is hard and brittle and this part involved some very cautious cuts. In this picture you can just make out the lower web now it has been machined back and all that is needed is a clean of the areas that had been machined and glue the block in. 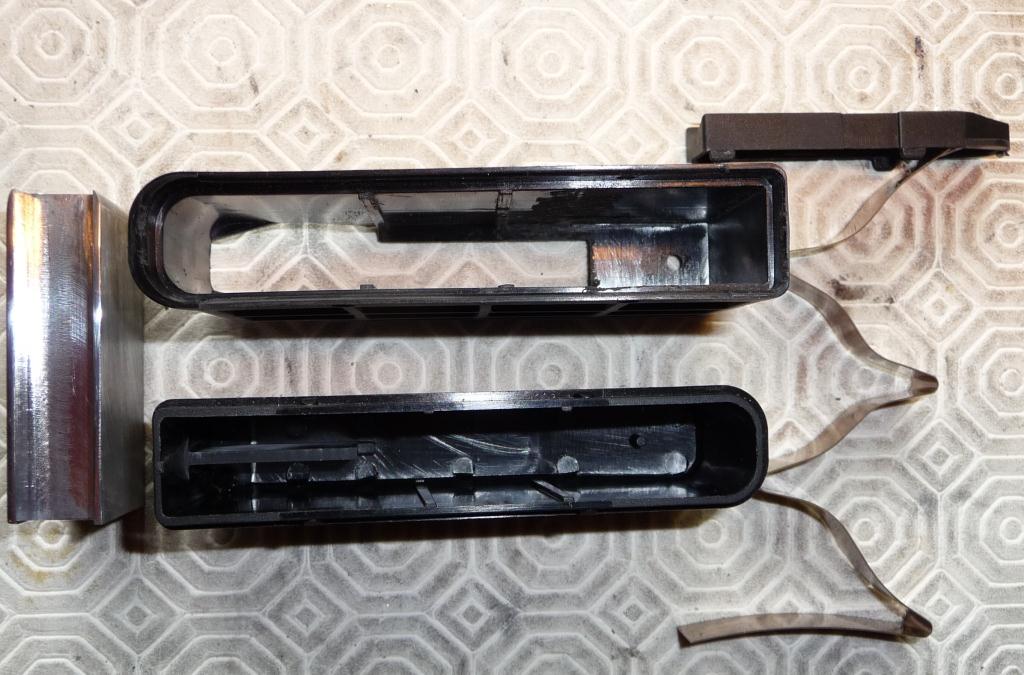 I was determined to do the whole thing without any visible indication of fixings so I opted for an epoxy adhesive and attached the block to the upper half of the magazine. Once set it was just a matter of assembling the whole lot and testing and here it is complete with new longer .223’s 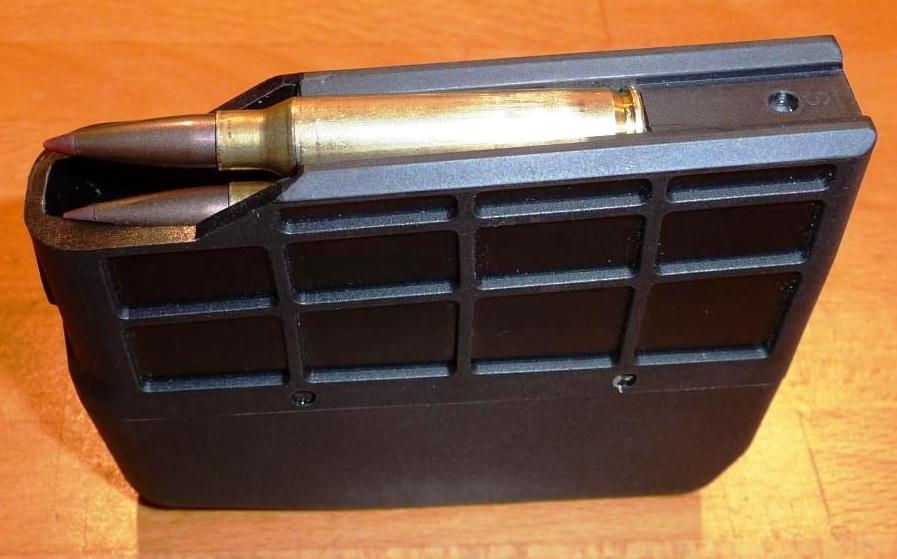 So what did I learn? Well if you glue the block into the upper section is makes it difficult to push the upper and lower section together so next time I would machine a relief along the lower back edge of my block to make assembly a bit easier. Also the Danskdremel actually did the job it was supposed to however I am tempted to mill the upper web out if I ever get asked to do this again.

Am I pleased with the job? Given the number of cringe moments, too right I am pleased with it and this T3 will now be able to feed a reasonable length round from a magazine that externally looks just like an unmodified one.