It is time to start looking at getting some rounds through the recently received Steyr SSG 69 P1. In theory with a 1:12 twist and a 660mm/26″ it can cope with anything in the 145-175 grain range with ease and this very nicely brackets the available military ammunition plus civilian/law enforcement applications such as the 155, 168 and 175 grain bullets so quite a choice really.

I have opted for the Lapua B476 170 grain Lockbase. So why should I choose what is a reasonably old form bullet for such a rifle? Well that is quite easy to answer, the 170 Lockbase was the basis of the Lapua factory .308 HPS (High Performance Sniper) and the more recent .308 HPS Ti (Thermally Insensitive) and has been used to great effect in theatre and was a firm favourite in my AI when it was chambered in 7,62×51.

Lapua tell us The 170 Lockbase provides the shooter with an exceptionally flat trajectory, and extends the effective range of the 308 Win to near 300 Win Mag territory.

That sounds impressive and it certainly worked well before with a stout load of N540 so good enough reason to use it again. The only thing is the Steyr has a push fit barrel and I really do not want to start swapping out such a barrel as it involves machining out the old stub and then threading the inside of a hardened receiver, either that or sending it back to Steyr for a new barrel which is not going to be cheap. So my choice of powder will be TR140 and my plan is to emulate the later HPS Ti as best I can. Easier said than done, the new HPS has staked primers, a special undisclosed powder (The older HPS used Bofors powder) and was built to 2.795″. The 170 Lockbase has a G1 BC of 0.498 and a G7 BC of 0.249 so reasonable but not cutting edge. One thing in favour for the 170LB is it is formed from the front and the copper jacket finishes with a boat tail and a strange closing resulting in a hole with slightly raised edges, the purpose being to allow the air to bleed from the back of the bullet so reducing drag and aiding stability through the transitional stage. 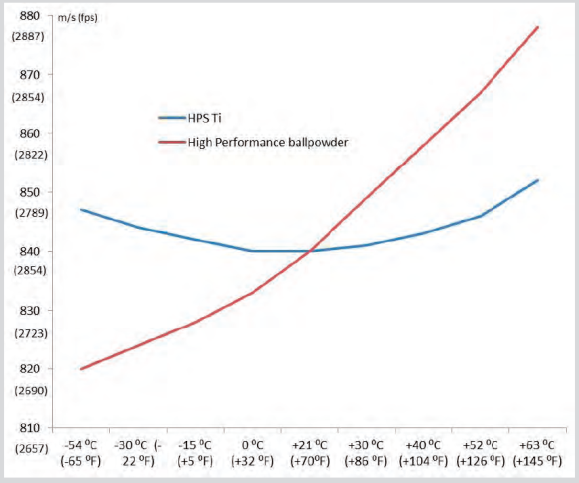 Now there is one minor dilemma, the OAL to the lands of the SSG 69 is 2.890″ and I previously built to 2.875″ so a 15 thou jump in the AI, if I am to build to 2.795″ I am closer to a 95 thou jump however this does mean I have lots of room to experiment with as I move towards the lands. Finally, the load of TR140, well the good news is 100% case capacity is virtually the exact load required to get me to the desired 2756 fps (840m/s) Coincidence or what? I will of course start a little bit lower and work the load to the desired point, across a chrono and looking for signs of over pressure. The SSG’s 6 lugs look OK however this is a used rifle, albeit a very clean used rifle so I have no real indication of the rifles previous life.

My predicted starting drops are as follows and I will be taking my Kestrel 4500AB along as well to run predictions on the day. Yes I know electronic aids are not allowed on the firing point in competitions however this is not a competition and I will take all the help I can find when shooting a new rifle for the first time.

Right so assuming this side of things goes according to plan the next job is to fit a new ballistic cam to suit the new loads performance. I rang Swarovski UK a couple of days ago to see if they could supply a bikini ‘scope cover to replace the awful BC’s that were fitted, the plan being to move on to a replacement cam. That was the plan however Swarovski UK denied any knowledge of the ZFM6x42Z, then told me it has been discontinued for years and they held no spares, however if they did find anything they would call me. CLUNK and the ‘phone went down at the other end. So let’s assume the UK are not going to have any cams. Of course I can always ring the Austrian office however I decided to drop the existing cam off and dimension it so I can build my own. 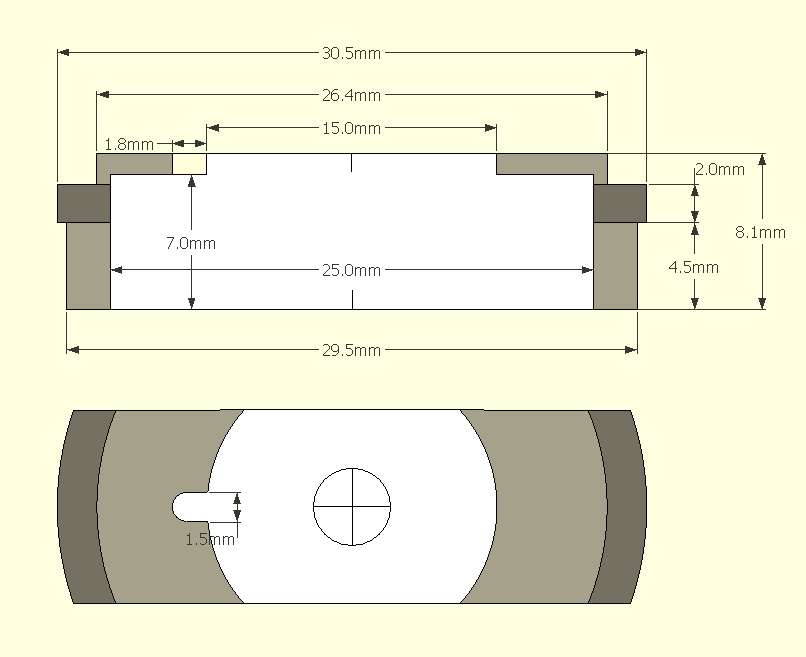 hat I will do is build a couple of blanks and fit one to the elevation drum, add some masking tape or similar and then shoot as many distances as possible to set the datums, from this I can calculate the missing distances and engrave them along with a number to indicate the distance, once done I can anodise the cam and white in the numbers and the job is done. Why two cams? Well you just know what will happen if I only build the one…..

After a lot of experimentation and some serious research I have tightened up my Quickload TR140 data and I am confident it is absolutely on the button now. Well as close as QL will allow. This has allowed me to go back and validate using existing data and confirm results.

It is important to understand that Quickload is not a direct alternative to load development and was never intended to be however when it comes to crunching through ‘What if’ scenarios on a cold wet Sunday it is perfect for my needs. Today I was looking at Tr140 for lightweight bullets in the 6,5-284 and it took under a minute to confirm my views that is was not going to be adequate for the job due to it’s speed however such a check costs nothing and is always interesting.

Incidentally, modelling confirms TR140 is a slighter better choice than Varget for my 6,5×47 which is handy given the scarcity of Varget and cost where TR140 is readily available right now.

These are my figures for TR140 however these are my own findings and I would strongly recommend people to check and confirm this data for themselves. I have a data file if anyone is interested. 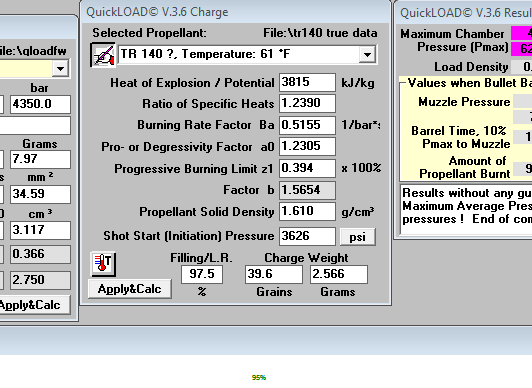 I see the Reload Swiss site has gone live at last and lists a range of 10 new powders to cover most bases for those of us that reload. The chart below shows the relative burn off velocity of Reload Swiss powders on the left versus some of the current powders available to us and it is interesting to say the least. 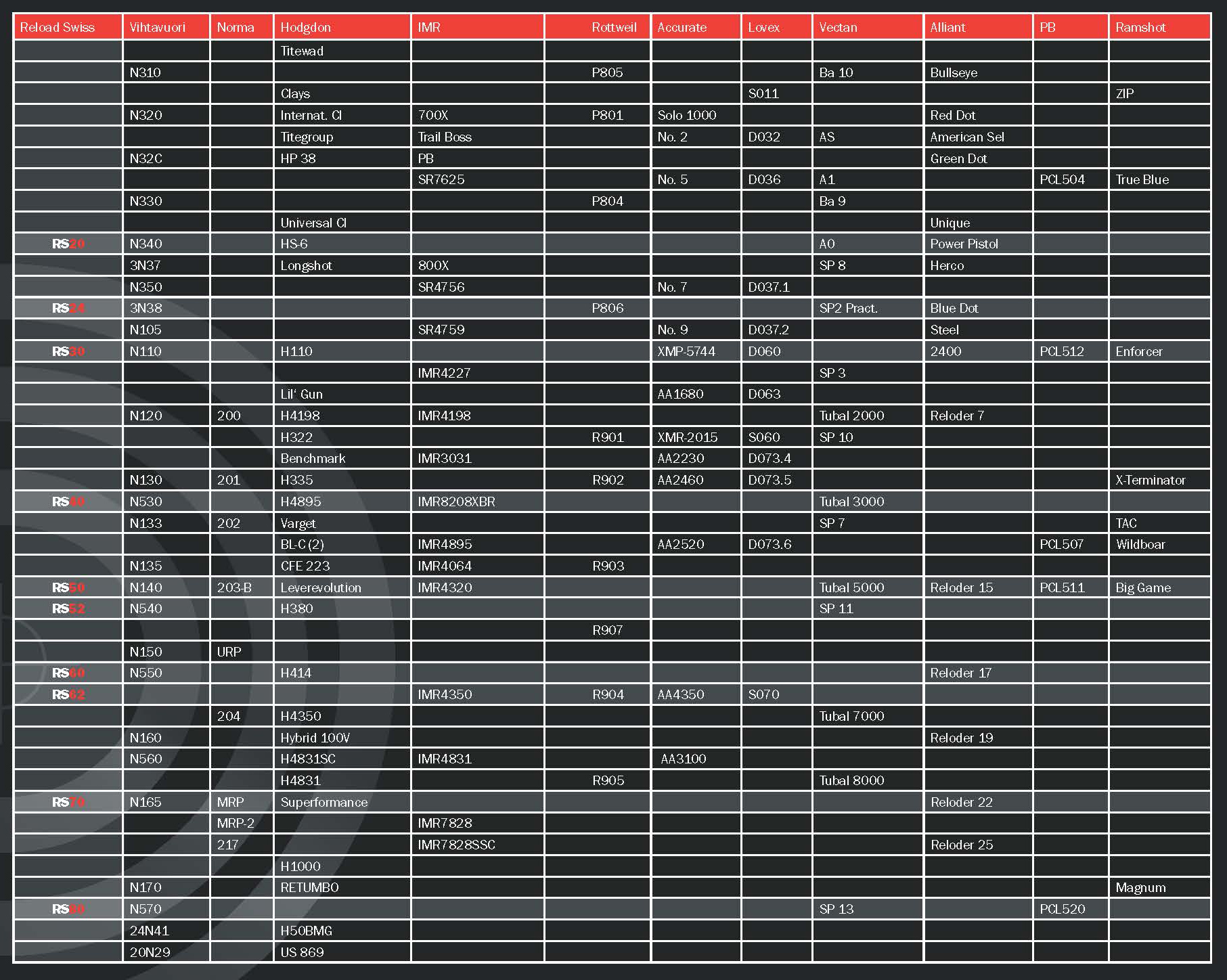 So assuming this chart is correct or very close which I am sure it is, it would appear Reload Swiss are doing 1:1 powders for some of the most commonly used Vihtavuori powders including N110, N140, N530, N540, N550 and N165, reading across to Hodgdon and H4895 is covered and Alliant Reloder 15, 17 and 22 are covered so that is me sorted!

Also I was impressed to see a QuickLoad file which means you can import these new powders straight into QuickLoad and start crunching the numbers. This data in particular impressed me as I use QL a lot for the modelling of new loads and cartridges. Of course the cynic in me asks how they managed to come up with such data so quickly, this could be the end result of a lot of testing for QL and it could equally be the data has been re-badged. In other words is the new Reload Swisss range really a brand new range of powders or existing powders already being manufactured by Nitrochemie and simply being re-branded? Time will tell on this one.

One minor downside is the current distributor list does not show anyone here in the UK at this early stage so fingers crossed they get over here, are available and not marketed at some of the outrageous prices we have recently seen for other products available in the UK.

Information is starting to come out about a new range of reloading powders from Nitrochemie, the manufacturers of the UK available TR140 and Elcho 15. This is exciting news for UK reloaders given the scarcity of some of the favourite powders used over here.

Reload Swiss is the name for reloading powders that 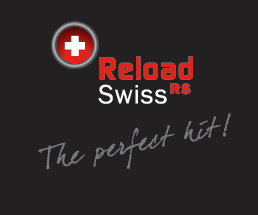 will be available in different burn rates to suit everything from 9mm Luger to .338LM with a couple of offerings that can be used for reloading  the .308.

I have a Pdf here that covers the range of powders, the uses and burn characteristics however it is too big to upload directly to my Journal so if you are reading this and would like to know more just drop me an email and I can send a copy by return.

The range includes the following powders:

Pete W added this comment a while ago and I have used it for the basis of this post so it is easier to find.