We are delighted to announce SG Precision as  the exclusive US distributor for our Shooting Shed OAL Gauges.

This means US customers can order our OAL Gauge locally and SG Precision also offer a case tapping service to suit our 8mmx0.75 thread, additionally the US Specification OAL Gauge has a removable rear section to enable a custom rear bushing to suit you particular action to be fitted. Speedy and Greg can supply these bushings to suit your needs.

Firstly the OAL (Overall Length) gauges. We made some changes to our OAL gauge design earlier this year and this is an example of our new ‘Signature’ version, all but impossible to photograph and looks like it could do with another polish however you should get the idea. It is now exclusively manufactured from stainless steel and measures around 355,0mm in length, threaded 8mmx0,75 on the nose section. The advantages of such construction are longevity and precision, with a stainless steel body it is going to last a lifetime with normal use and the stainless pusher will not flex so you get a precise measurement every time you use it.

Why signature? We have been looking at some additions to our product range for a while, both new items and upgrades and we decided the new items would be described as our signature range as they will be, dare I say even better than before.

The metric thread is not the same as some alternatives and for good reason, it means people usually come to us to have their cases drilled and tapped which means we can control the quality of the whole system.

Our OAL gauges are shipped right across the world and we have many customers on all continents however if you live in the USA you will need to contact Speedy or Greg who hold stock for immediate shipping.

As you may already know, we produce an adapter for the RCBS Chargemaster to prevent over throws of powder. The concept goes back many years to me walking past the Viking who throws all of the powder for our reloading. I was dim enough to ask how it was going and received a terse reply telling me it was not great (Or words to that effect) Apparently it was over throwing virtually every single charge so I made her an adapter and the issue was all but 100% resolved. These days I seldom ask how the powder throwing is going and I do wish I had asked her how many loads she gets between failures for an long term test.

From the RCBS CM came the Hornady and Lyman Gen 5 adapters and eventually the Lyman Gen 6 and I had built a couple of adapters in the past however the sketch had been filed so when a customer emailed us to ask if we could make such an adapter I thought it would be a good idea to draw and file the thing at  the same time.

Anyway, I machined it, the Viking shipped it and the customer says it works, in fact he does say a bit more and I suspect this is what is known in the trade as a ‘Customer testimonial’

Thought I’d share the outcome of a recent commission for Dave at Shooting Shed. I’ve become the guinea-pig for a “Thingy” for Lyman Gen 6 electronic load dispensers. I sent the plastic factory plug off to Dave with instructions that I wanted something that would work better with powders ranging from the fine and uniform N133 which can easily over-trickle with the standard plug to RS62 which tends to clump. Within a few days he came back with the end result, beautifully machined with a longer plug equipped with more of a gradual bellmouth then the standard version. I tried it today whilst loading for some Muntjac shooting this week and the results were quite impressive. 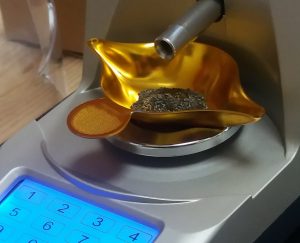 20 rounds loaded and instead of loading to within 0.2 and then trickling up, I thought I’d try it with straight loads. End result was and ES of 0.1, and four from 20 were just under 0.1gr over, the rest being spot on. Time for a 24.2gr charge was 16 seconds each time. Had I loaded just under and trickled up they would all have been spot on. This was from a powder that regularly threw to 0.2gr over previously.

Now my view is 80% efficiency is not quite where I would like this Gen 6 thingy to be so I will re-visit it at some point however I ideally need a Gen 6 plus powder plus time so it may have to wait for a while.

We have been making OAL (Over All Length) Gauges for a while now and the design has pretty much remained unchanged however I was always slightly unhappy with the central body tube as it was machined from 6082 Aluminium and was a pain to polish and would mark very easily so it was time for a change.

The central body tube is now seamless 316 Stainless tube and the lock screw is now all stainless instead of the plastic/stainless I used before. 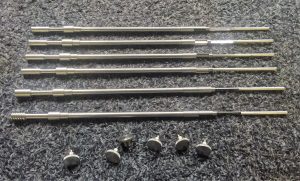 Will it perform any better, probably not however it will be slightly more robust albeit a tad heavier and I suspect you could probably use them as tent pegs as they really are rigid and solid when used. This is the first batch awaiting the M5 drill and tap operation in the rear section, they can then be polished and shipped to their new owners. As ever, they are guaranteed for my life.

Finally, yes I know there are three different types of handle as I still cannot decide which style I prefer, right now grooves are looking to be favourite although the Viking prefers the plain narrow handles.

Following on from my previous post regarding fire forming .303 brass (First shot) with an O’Ring seated tight to the cartridge rim, this image shows from top to bottom: 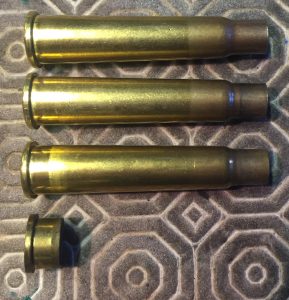 No4 Shows what can eventually happen as the case is repeatedly stretched and full length re-sized between shots.

No2 has been shot once and the overall length is now +.009″/0,02mm to factory length which gives an indication of how far the shoulder and neck has moved forward.

No3 is from a P14 with a reasonable chamber however after just one shot you can see indication of stretching as a shiny section just in front of the rim. The actual case length is now +.007.5″/0,02mm so shorter than that fired in the Lee Speed.

The difference in shoulder profiles is interesting, No2 being a commercial BSA Lee Speed probably built around 1900 and No3 being a Remington built P14 from around 1917 so it is worth remembering not all rifle chambers are equal and especially not the .303 service rifles from the first quarter of the last century

No4 is from a 1915 BSA No1 Mk3* that was well past its sell by date and sadly had to be retired for a number of reasons.

If you shoot and reload for a .303 chambered rifle you probably know all about case head separation. This is where the case stretches and thins just in front of the rim and eventually fails leaving a cartridge case minus the rim stuck in the chamber. The good news is the remains of the case is usually easily removed, either with a phosphor bronze brush or a broken case extractor. I have used both methods in the past however if you can avoid the issue in the first place life is a lot easier.

Today was a bit of change of plan and saw us at the range complete with the Lurcher at midday, the Labrador being otherwise indisposed leaping around picking up Pheasants and Partridges.  The Lurcher is always happy to get out to the range as it means he can meet and greet people, run around like a, well like a Lurcher and once tired he spends some quality time sleeping in the back of the Landrover whilst we shoot, talk and generally enjoy ourselves. It works well for all parties concerned.

As this was a bit of a last minute thing we opted to take four rifles. 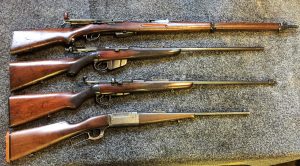 The Schmidt Rubin M1911 chambered in 7,5×55 Swiss. A BSA Lee Speed (Sporter) chambered in .303 British along with a BSA No1 Mk3 Sporter, again in .303 British and finally the Savage M1899 chambered in 22 Savage High Power. The middle two rifles being .303 were in dire need of some new brass and this gave me the opportunity to show you how I fire form my .303 Brass.

The vast majority of people load their favourite .303 round typically with around 41,0 grains of N140 behind a 174 grain SMK which works well for distance stuff and is a reasonable approximation of MkVII Ball. Get it right and you have a superbly accurate round. Incidentally, I usually start at around 39,0 grains of N140 and work up, I have also found similar loads with RS50 (What was TR140) work equally well although RS50 appears to fractionally slower than N140 which is not a bad thing. Whatever you opt for please do ensure it is safe for you rifle.

Once loaded it is simply a matter of stuffing the round in your rifle and pulling the trigger in a safe manner. Well nearly…

The thing about military rifles chambered in .303 is the chambers can be rather generous, after all they were designed to be used in war where a shot was fired and the spent cartridge case discarded. The military certainly were not interested in preserving fired cases and a generous chamber meant the round could be chambered in muddy or dusty conditions which it did admirably. The downside is the cartridge case which head spaces off the rim tended to rattle around inside the chamber when ignited, the shoulders would go forward however the rim would go back and this would lead to stretching/thinning of the brass just forward of the rim, this can be evident on even once fired cases where the stretched area of material is clearly evident. 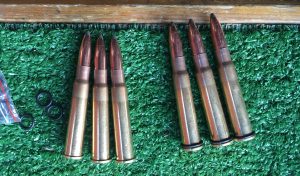 This leads to case failure in time so if I have a new box of brass to work with I add an O’ring to the rear of the case just in front of the rim. This means when the bolt is closed the O’ring compresses and holds the case head tight to the bolt face and as the internal ballistics take place the case head stays where it is and the shoulder moves forward. Yes the case has stretched but in a far more manageable manner. 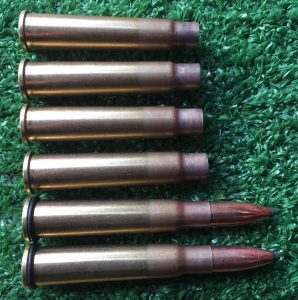 You can clearly see the difference in the shoulder position on this ‘Before and After’ image.I guess a picture of a case shot without an O’ring would be good at this stage however it would also seriously upset my nice neat rows of fired brass as there would be a gap.

I will look out for a stretched case and add it to this post if I find one.

Look carefully and you will spot a ring on the bullet just behind the meplat, this is where the seater stem has been cutting into the jacket as it is designed for a 174 SMK as opposed to a 150 grain soft nosed bullet such as the Pro Hunter here. I will machine a new seater stem to suit the profile of the 150 at some stage however as today was a combination of zeroing and blowing the cases neck forward it was not incredibly important.

So there you are, fire formed 303 brass that should last for ages with neck sizing only and an occasional annealing. Before you ask, the O’rings I use are actually those used on our .308 Cleaning Rod Guides and I leave the ordering of such things to the Viking and have long since forgotten the details, however if you would really like to know give her a shout and I am sure she will be able to help 🙂