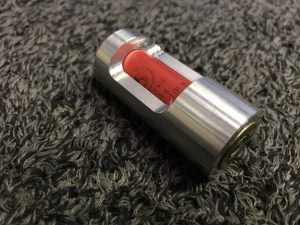 request and this one is worth taking a closer look at.

A customer reloads his own 28 bore cartridges and asked if we could build a holder that supports the case during the roll crimping operation, so here is the prototype.

The holder is machined from soft metal (6082 Aluminium) sized to the cartridge case with the case head just standing proud. The cut out is to enable the case to be held without rotating during the operation. The prototype pictured seems to tick the box so I will machine a small handful in case i ever get asked again. 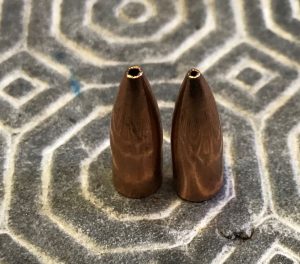 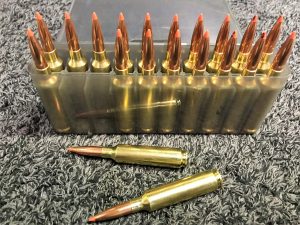 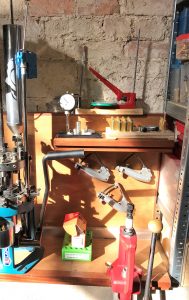 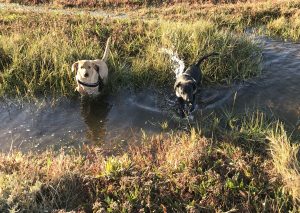 I seldom if ever write hints and tips to this Journal, mostly because I just do not do that sort of thing as the internet is full of such stuff, however I was reloading today and something struck me as awkward so I will share it with you. 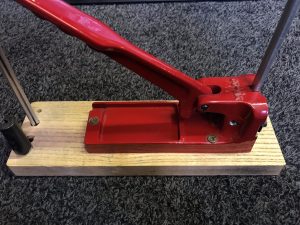 I occasionally use a Forster Coax Primer which was purchased after I managed to ‘misplace’ my RCBS hand priming tools and needed a replacement, even after the RCBS tools were found I still occasionally use the Forster thing and quite like it for some applications.

Today was such a time and I grabbed a box of primers and remembered just how much of a faff it is loading the primers into the feed tubes. The idea is you empty the primers into that flat tray area at the back of the tool, then manually flip them the right way up, then lay the flat tube at the back and invert the whole lot so the primers fall into the tube, well that is the theory however it is a bit awkward. 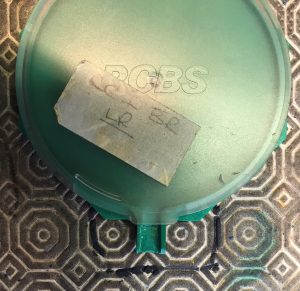 I have a box full of spare RCBS primer trays which have the benefit of acting as flippers plus they have lids so ideal for loading primers into the tubes if only the tubes would fit. So a couple of minutes with a sharp 1/4″ wood chisel and the feed end is easily modified to accept the Forster feed tube. I actually trimmed it to size, took the picture and thought it looked a bit rough when I blew the picture up so I have since tidied it slightly, not that it makes any difference to the operation. 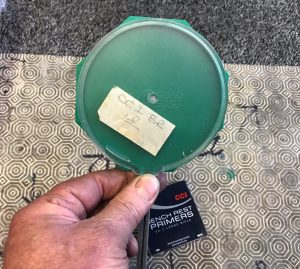 Then it is simply a matter of holding the tube in place with your thumb, invert the tray and tube and give it a rattle and the primers fall into the tube with the greatest of ease.

Job done and I can go back to priming the brass I am working with today.

Alternatively I could always of not misplaced the original RCBS primer tools, then I would not have needed to buy the Forster…

I seem to be very quiet on the Journal front, a combination of two new Labrador puppies and a load of rifle and revolver work is keeping us both very occupied and it is probably 10 days since we were at the Salt Marshes which also means I am starting to pine for the Saltfleet chip shop. The dogs however are quite happy as they are getting lots of local walks and the pups who spend a fair amount of their time in the workshop are getting used to new noises and people and seem to be taking it in their strides.

We have been working on some shiny parts and this week was a mix of OAL gauges and comparators along with a new rear bag rider. 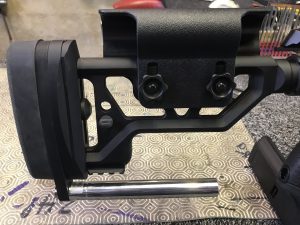 People have been asking about a bag rider for the new Tikka TAC chassis system so here it is. 6082 Aluminium with A4 stainless screws so it is not going to rust any time soon. The plate is vapour honed and hard anodised and the rider tube is polished as they seem to track better with this finish. It will be added to our shop very shortly. Weight is around 165 grams for those of you shooting on a diet.

On the subject of OAL gauges someone recently pointed out our gauge did not fit his DTA Bullpup which set me thinking… So coming shortly is a new longer OAL gauge suitable for Bullpups, 50 cals and rifles with very long actions. The new OAL gauge will be 50,0mm longer which should cover all bases and as ever will be of all 316 Stainless construction. We can also supply the gauges with a removable rear end and supply bushings specifically for your rifle action to support the rear end.