Skip to content
In the pursuance of the knowledge of all things related to the Martini action type rimfire rifles, I had to get my hands on a Martini Henry conversion at some point and eventually this thing surfaced.

It appears to be a MkII Martini Henry (Remember the film ‘Zulu’?) and would have been originally chambered in .577/450. At some point the rifle was taken out of service and converted to rimfire by W.W. Greener.
This rifle does not have the SMRC stamp on the receiver (Society of Miniature Rifle Clubs) The SMRC is better known as the NSRA these days and existed from around 1901-1902 to the late 40s and it is possible that this conversion was made prior to the formation of the Society.
Being a MkII the original rifle dates from 1876 to 1889 which means the original rifle is 130+ years old, with the conversion probably being 120+ years ago. I cannot confirm this as the receiver has been mostly scrubbed at some point however it does have a Roman II on the right-hand side of the receiver. The butt section does have some faint markings including the Roman II over the numeric 2 plus a separate 3 stamped elsewhere. So most likely a MkII unless it is a MkI converted to MkII which I guess is possible as the lever, trigger guard and block are not numbered to the receiver. Of course, with a 130-year-old rifle, things are sure to get swapped out along the way.
The rear aperture sight is a BSA No 8, so no positive click stops to enjoy. The rifle had been fitted with a No 8 in the past, which was later removed however it has witness marks in the form of two screw holes and compression marks in the wood to identify the type of sight it had worn.
I had a spare No 8 here so I fitted it and I think the rifle looks good for it, plus it will enable me to get a better idea of the rifle’s accuracy. 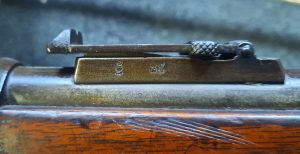 The original rear sight is graduated for 25, 50 and 100 yards on the left-hand side of the sight base for the .22 ammunition.
Interestingly, a rear barrel band is fitted which is not always the case with these rifle conversions and the band is correctly sized to the barrel. It was suggested to me that this rifle was a trainer early in its life and given the lack of SMRC stamps and a decent fitting barrel band this is an interesting idea although I am not convinced.
Legend has it that this rifle was held in the Tower of London at some point in the past, which was recounted to me by the previous owner, it is a nice thought. 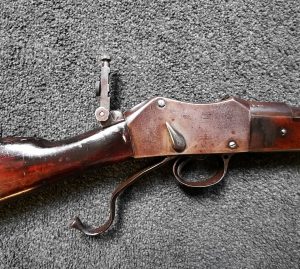 Cosmetically the rifle is battered, however it has developed a lovely patina through the years and the No8 rear sight blends in quite well to give an idea of how it would have looked in better times. The trigger breaks very crisply at around four and a bit pounds.  I could improve this however it is as it was, so it would be wrong to change things. More and more I believe in keeping such rifles as they were, after all we are custodians as opposed to owners of such things.
The bore is, erm… 120 years old, so less than perfect however I have shot worse and with some zeroing I would hope for better than 3” groups off my elbows at 50 yards, with some effort. Better than this will be a bonus and I am really looking forward to getting out with it. 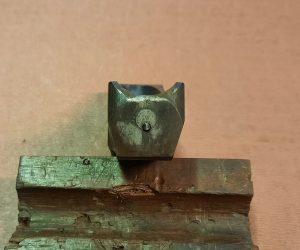 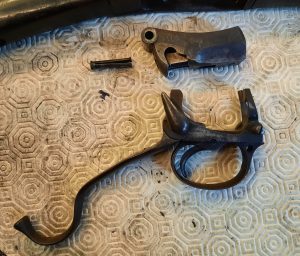 You can get an idea of the relationship between the lever and block. I will not detail the strip and re-assembly as it is well documented elsewhere.
Those of you that own a Vickers, or BSA Martini action rifle will instantly recognise this and the later developments of what stems back to the Peabody concept, refined by Fredrick Von Martini.
So, there you are, yet another ancient rimfire rifle.
…and why am I telling you this? Because you need to know.