We seem to see a lot of older BSA Martini action type rifles these days. As well as guns coming in through the trade we see a fair few customer guns come through the door, we even have some Vickers Martini action target rifles in for work next week.

When I say we, I do indeed mean myself and the Viking because that is about it for the Shooting Shed. We do have a half man who helps out occasionally but for the most it is just the two of plus three Labs and the Lurcher. 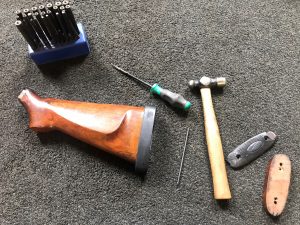 Today was kicked off with a butt extension on a BSA Model 15 Centurion. It had been shortened at some point, then extended with a block of wood and was still short in the shoulder. One customer stipulation was that the original butt plate had to be used. So a piece of hard rubber was cut to size and fitted (Sounds easy doesn’t it!)

First job after the original spacer had finally been removed was true the face of the butt stock up as it was a bit rough around the edges, then plug the multitude of fixing holes. Then attach the oversize spacer with new screws and mark the shape of the butt. As the butt plate was the same dimensions as the butt I would have to grind the spacer square which was disappointing. I would have preferred to maintain the original taper and added a red English pad, however at least this way I kept the rifle as original as possible. 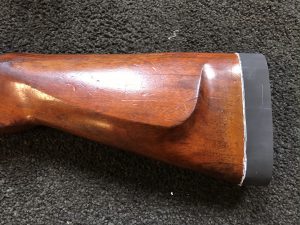 I always mark out with a white wax pencil, so I can band saw the excess rubber off then grind to the wax line. Reattach and mark again and finally grind until the wax pencil mark is gone.

Hard rubber can be polished easily, I use 1500 then 3200 grit paper and finish with wax however you can really get this stuff to shine, assuming you have not choked on the dust and fumes.

The original butt plate looks to have caught fire at some point and was not quite the same shape so some care had to be taken. It was also slightly bent (Not cured!) So that had to be addressed.

The black things in a blue holder in the first picture are transfer punches, handy for spotting through holes to mark screws, I always mark one, drill and screw, then mark the second with the first screw in place.

Second image is the spacer ground close to form, the white wax crayon is marking the next pass. I used to use a scriber and chalk however the scriber can bevel the edge of the butt so I prefer this method.

The final image is the spacer and butt plate fitted and everything given a wipe over. I will leave it for 24 hours and give it a final polish and it should be good to go.

I have a BSA International Mk1 to crown and a Mk4 that needs the barrel re-timing plus crowning and a few questions on these remarkable rifles to answer by email so I guess people know we like working on them.

Right, I have two shotguns that came in for repair that I need to get out and test before the day is over so I had best get on.