We have just about finished our eCommerce site (Internet shop) There is still a database update to get through however that is scheduled for early Tuesday 17/06 and after that we should be about there other than some niggling SSL issues on a few pages within the site and they are certainly not anything to do with the shopping and transactions side of things.

Anyway, I created a bit of a dilemma for myself. Within the cleaning rod guide side of the shop is the Pre-45 section which is for Pre 1945 rifle action military rifles such as the No4Mk1 Enfield and the Schmidt Rubin K31 amongst others.

I wanted to add a logo as a primary image, however there is not a logo for the 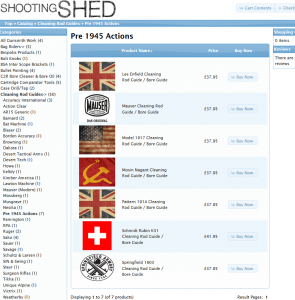 Lee Enfield as such rifles were built by multiple manufacturers and adding a BSA logo would not do the LSA builds justice so I was in a bit of a quandary so I chose a Union flag, ah but what about Australian, Canadian and Indian manufacture? It gets even worse when you consider the Pattern 1914 or Model 1917 rifles. Designed within the UK, based on a German design and ultimately produced by three factories in the USofA. A choice of logo or flag for these fine rifles was always going to be controversial so I chose the Union flag for the P14 as it was chambered in .303 and accordingly, the 30-06 chambered M1917 gets the American flag.  I hope that works for our discerning customers.

On the subject of American rifles or not I came across this the other day. A P14, or more correctly Rifle, .303 Pattern 1914  This particular model was manufactured by Winchester 1917 according to the barrel date stamp. At first glance it is quite unremarkable, in fact it has been messed around as the icon rear sight wings have been cut back to this outlandish form.

Looking closer the rear sight is missing, OK that is not a problem as I can soon find one and I even have a spare fine vernier as used on the P14 Mk 1* (W) with the F suffix which was manufactured from 1916. Of course I still have those wings to consider… 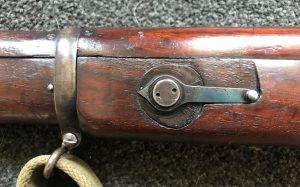 Moving onto the other side it has the front Long Range Dial Sight (Volley) fitted which is fairly unusual as they were invariably binned when the rifles went through the Weedon Royal Ordnance Depot in the late 30s. The rear Volley sight is missing, however yet again this is not a problem as I should have one in my British spares boxes. It even has a reasonable sling on it. Oh and it even has an original cleaning kit behind the trapdoor in the butt plate. 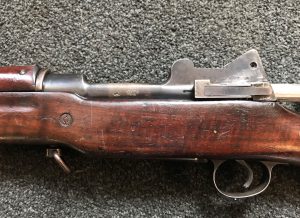 Also, have you also noticed the Parker Hale swivel  just in front of the floor plate? What we have here is an ex SRb or Service Rifle (b) rifle although I suspect an eager RCO might of commented on the rear wings. Actually I know it was an SRb rifle as it had been in the hands of the same owner for the past 35 years and that is what he used it for complete with a Parker Hale rear sight.

So, what to do with it? Well shoot it of course!

I already have a Remington P14 with a fine vernier rear sight with a superb Brindles trigger box fitted and I have a spare Brindles trigger so again it is something I can add along the way and it should give me a reasonably accurate rifle and lets face it, the P14 has always been *the* accurate .303 rifle, especially when compared to contemporary 303 battle rifles.

But if I already have an accurate P14 why get another one? Well when I first saw it I was immediately tempted to use it for a P1913 conversion, especially as I have an original .276 Enfield barrel, albeit not as pretty as it could be. However having thought about it  I am inclined to think repairing the wings and adding a period ‘scope could be the way forward. I have often thought about this option with my Remington however I just did not have the heart to drill and tap it for the ‘scope rings. This Winchester is different though, it has been messed around with already so I will not feel so bad about such a conversion.

First job is find a scrap P14 receiver to salvage some wings from, failing that it is out with a suitable sized piece of plate and a hacksaw.