Another Schmidt Rubin arrived recently, this time a Model 1889 chambered in 7,5×53,5mm so originally designed for the GP90 round.

This one dates back to 1893 so 125 years old and is in remarkably good condition considering its age and with all matching numbers and came with a sling and a later charger clip to enable the 12 round magazine to be filled quickly with the use of two of the charger clips. 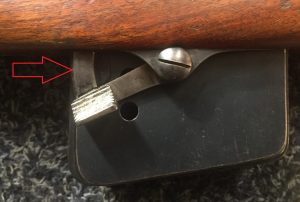 On the subject of magazines the original design called for a magazine cut-off in the form of a lever on the right hand side of the magazine, push it up and the magazine indexes down slightly thus preventing the bolt from picking up rounds as it is cycled. Interestingly this rifle is fitted with the spring clip to prevent the magazine cut-off from being operated and can be seen in this image (The red arrow shows the clip) The clip is easily removed to enable the magazine to be fully detached from the rifle if required.

Further on magazines with the 12 round capacity plus one in the chamber giving 13 rounds in total the M1889 is one of the higher capacity military bolt action rifles and it is only the 7,62×51 chambered Ishapore 2A1 which also can have a 12 round magazine that springs to mind as an equivalent for round capacity. Please feel free to correct me if you know of higher capacity military bolt action rifles. Whilst on the subject of magazines, this rifle is chambered for the 7,5×53,5mm GP90 as opposed to the later 7,5x55mm GP11 and there are some significant differences between the two with the bottom line being do not load your GP90 compatible M1889 with the later, longer cased higher pressure GP11 ammunition as it will almost certainly end in tears. I will discuss the GP90 in a later article as I need to get some made if I am to shoot this thing. 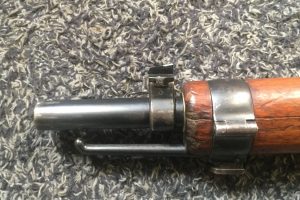 The front sight at the pointy end of the 730mm/31″ 3 groove barrel has been swapped for a later model to cater for the previous owner’s own loading however I have an original sight as well so can always swap it back for the sake of completeness.

As ever this Schmidt Rubin has the usual incredibly long straight acting bolt however this one differs from later models in that it is a rear locker, or in other

words the lugs are at the rear as opposed to the front. Personally I have no issues with rear lockers and it worked for the Lee Enfield, some earlier Schultz and Larsen models and even some French MAS models. Later on the rear locking concept was used by Robert Chombart for the M41 and the SSG69P1.

Anyway, it is a rear locker as oppressed to the later front lockers, or more accurately mid lockers as the bolt lugs were situated midway up the bolt for the later variants.

One thing I have not got around to is pulling the whole thing apart to look for identification marks which I plan on doing later today and will report back accordingly.