as it ticked all of the boxes; it is a John Moses Browning design, FN produced and a take down rifle, add to that it is a .22 Rim-fire and in rather nice condition and what is there not to like?

These little rifles were designed by Browning in 1919 and first produced in 1922 and production ceased in 1974, during this period a very modest 150,000 were produced. To put this into perspective around 500,000 SA-22 FN Browning Semi-automatic .22 Rimfire have been produced since 1914 however production was shifted from Herstal to Japan in the 1970s whereas production of the Trombone just stopped in the 1970s. Being described as a take-down means the rifle has to be capable of being 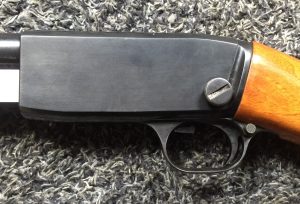 disassembled without hand tools and this is easily undertaken by unscrewing the captive thumb screw on the right rear of the receiver. Give this a few turns and a tug and the rifle breaks into two handy sized pieces ready for storage or, erm… well whatever you want to do with it when it is in bits. From memory the tubular magazine holds 10-12 rounds of rim-fire ammunition dependant on what you load it with and the barrel is stamped .22L however a .22LR round chambers perfectly and the bolt can be closed on a .22LR head space gauge. I have read in the past that FN stamped .22LR chambers as .22L however I have never confirmed this so this rifle might just be the proof required. Luckily I have .22L and .22LR here if needed.

There is, of course, a difference between the .22L and .22LR dimensionally with the .22L being some 2,8mm shorter than the .22LR which is 25,4mm in length (ish) there are also differences in projectile weight and velocities just to confuse matters further.

This particular rifle looks to have been produced around 1966-68 and is in remarkable condition with a crisp bright varnish over blonde wood with the bluing in excellent condition. This rifle also has grooves in the receiver so a period ‘scope could easily be attached. Operation is quite slick and I have no doubt that it will be huge fun to shoot when we head down the range next.

3 Replies to “The FN Trombone”