I am still avoiding machinery however we still have guns to work on and first job today is to remove some stuck choke tubes from a Lanber 12 Bore O/U shotgun and give it a good service. Normally I would not comment further on stuck choke tubes however this is the third time this week I have had to perform such a task which would suggest some basic gun care is being over looked by some of my fellow shooters.

So my words of wisdom on the matter are very simple:

Remove and clean your choke tubes after every outing and that includes the male and female threads and re-assemble them with a good anti seize compound or a light wipe of oil.

You do not need to crank a choke tube up RFT (Really Flipping tight) I screw the choke tubes in by hand and use the pad of my thumb to tighten them and that is enough to hold them in place.

Remember, if they are well and truly stuck there is a good chance they will be damaged during the removal process so you will be paying for the removal of the chokes plus some replacements,  so it has got to be cheaper to remove and clean them after you have been shooting, surely?

Onto Lanber shotgun ejectors, ever so easy to remove and you do need to remove them from time to time as the springs and plungers rust however a careful clean and lubricate and you are invariably good to go, and it is well worth paying attention to such tasks as Lanber shotguns are no longer available here in the UK and as such spares are becoming increasingly difficult to source. 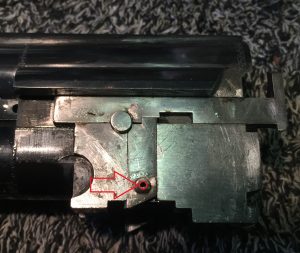 The removal process is as follows: Compress the ejector slightly to take weight  off the ejector trip.

Place a suitably sized pin punch into the hole identified in this image and push and you will feel a small spring plunger compress slightly.

Now, if you were careful whilst sliding the trip down the spring and plunger has remained captive, if however you paid slightly less attention than you should have done you have just launched a very small Pingdammit across the workshop and it is going to be interesting trying to source a replacement. Hopefully you have read this to the end before starting the job…

Next on the list was a Bettinsoli shotgun that required new ejectors and a service. Ejectors seldom come with the rims cut and the cutter I had was hopeless so I contacted Dr Kolby at Border Ballistics Technologies and a couple of weeks later a rim cutter arrived. As it was to be used today I needed a T handle holder and had nothing suitable available so I grabbed a suitable piece of stainless and headed to the lathe. 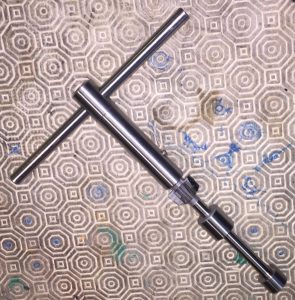 It machined OK however when I drilled the pilots I noticed it was a tad tough and it was when it went into the mill to drill the hole for the T Handle that I realised I had just grabbed what was probably the toughest bit of stainless in the workshop and had to resort to a carbide cutter for that T Handle hole. No matter, with the  handle completed the work could be done and I must say I am impressed, there was a tiny bit of chatter to start with however once the rim cut had been established the process went remarkably smoothly and the work is finished and ready for a test firing in the morning. I really should have taken a picture before it went back into the armoury.