In the ongoing quest to remain dry with the new flood coolant system I had ordered a screen and an A4 lump of acrylic and fitted it this evening. Hopefully the cut out will enable the compound slide to be used at any angle, as it is 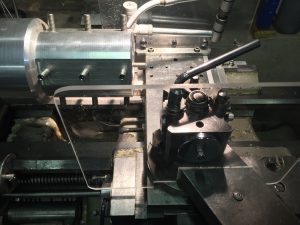 attached to the tool post by a 50,0mm magnet it is easily removed and the tests with a piece of cardboard to determine the optimum size and location should keep me reasonably dry from now on even though I have just about conquered the optimal feed nozzle location.  The Spider is in ready for a couple of bolt jobs first thing in the morning, after that I have an hour or so on the Mill and then it is back to rifle and shotgun work.

I am always interested in older cartridges and a

neighbour recently handed in this garden find, a Winchester Arms 45ACP round in remarkably good condition.  With the head stamp:

Given the markings I suspect this will be American ‘Lend-Lease’ ammunition as my understanding is Winchester focussed more on such production although not exclusively. What it was destined to be used in is a bit of a mystery as about all I can think of is the M1928 Thompson machine gun as I am not aware of the 1911 being in general military use in the British Army. I guess that is one mystery I may never solve. I will give it a careful clean with some bronze wire wool when I get a moment and see if any additional details are revealed.

This particular garden has been the source of some interesting finds including .303 Incendiary and it does make me wonder how such things ended up in such a location, luckily he will come and find me when he finds such things 🙂