I have a reasonable quality stock to work on in the next few weeks so today I mixed up some Red Oil for the toning of the Walnut. You can buy Red Oil ready finished however it only has a limited shelf life and is easily created in the workshop. The key ingredients are Alkanet root finely chopped and I finish it in a granite Mortar and Pestle. I do not attempt to reduce it to a fine powder, only to break it down into smaller pieces so I can strain it without leaving any contamination at a later point. To this I add Boiled Linseed Oil, Turpentine plus a couple of tweaks and I can add a dash of Terabine at the end if I wish to speed the drying process. I use a glass screw-top jar and once the liquids have been added to the Alkanet I screw the lid on, give it a good shake, write the date on the jar and place it in a warm dark place, allowing it to steep until I have the tone I require. It needs a good shake periodically and takes on an impressive red tone very quickly. 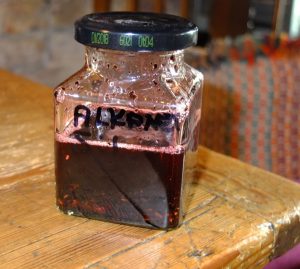 Once I am happy with the colour of the oil I double strain it through muslin to remove the Alkanet and it is ready to use. It is important to remember no matter how much Red oil you add to a piece of Walnut, if it is of an average grade it will remain average, albeit with an interesting red tone.

Looking at the concoction at this stage (It is under one hour old) reminds me of a tasty relish to be added to your Christmas Turkey however the smell should be enough to remind you not to eat the stuff, plus I seldom if ever eat Turkey and certainly not at Christmas!

You can see the Alkanet in the oil and you will note as mentioned before it is not too finely sized even though it has also been ground, with time the oil takes on a deep red/purple appearance, this is where I want it to be and the straining will remove the debris.

I enjoy working with wood and have a shelf full of different jars of things, some hand mixed and some purchased. I can remember calling into a stock inlet man I knew many years ago, he was an out worker for a well known London gun maker and his workshop was surprising when first visited. It was a brick outbuilding and inside it comprised of a stove in one corner with a Jack Russell curled up in an old wooden crate, a bench ran down one side of the room with an ancient wooden vice and stop let into it. Above were shelves with various jam jars filled to varying levels with dark liquids and round paint brushes that looked like they had been attacked by the Terrier. Behind was a machine station with a large and dangerous looking wire wheel on it, the sort of thing that could rip your arm off in the blink of an eye. Under the bench were various boxes of ‘things’ The stock in the vice was being inletted for a Mauser action destined to be used on big game and it was only the monogram on the barrel that was still in the white that have away its origin. Strewn along the top of the bench was an assortment of chisels and gauges with nothing digital in sight.

My Grandfather was a cabinet maker and it very much reminded me of his workshop but without the dog. As a child I would sometimes watch him work and even then I had a tendency to tidy things up, I would move the screwdrivers to one end of the bench and he would move them back without ever saying a word. I have a few of his tools to this day and will use them when it suits my needs, one of his mallets still sits on the side and is remarkably well balanced, sadly it shows evidence of minor woodworm and should have gone on the stove ages ago however I chose to treat it and keep using it.