Remember I mentioned a battered Anschütz 520 that arrived a few days ago? I have been thinking about it for a while, it was incredibly scruffy and of no real value in it’s existing condition so what could we do with it?

Well I certainly have a need for a short semi-auto rifle, my overland rimfire is a Remington Nylon 66 and as much as I do like it the rifle has some severe limitations. The magazine is filled from the butt and to reload is quite awkward, you need daylight and space and even then feeding new rounds into the tube is a slow task and I have ended up with loaded rounds at my feet or on the bench on more that one occasion. To try and overcome such issues I built a speed loading tube. This is basically a tube with a cap at one end and a taper at the other, the required number of rounds are inserted (I usually stop at 10) The tube is then used to ‘pour’ the rounds into the Nylon 66 magazine via the butt. Yes it works however it is far from ideal.

It was time to look for an alternative rifle and I had an open mind until the Anschütz 520 arrived. I have worked on and shot these rifles before and always been impressed, there has been some adverse reaction to them on the Forums however for me they have always been a handy little rifle with the added benefit of being of ‘Take down’ design with the barrel quickly removed by slackening off a screw on the underside of the forend just in front of the receiver.

what had arrived, scruffy however it looked functional and had a good bore, downside is it was incredibly long with it’s full length barrel which means it can be quite unwieldy in restricted areas.

First job was to strip it down to it’s component parts and I did lend a hand with the strip down process as I have had these things apart in the past, after that I left them to it and got on with the machines. The receiver and bolt assembly were thoroughly cleaned, the firing pin bearing surfaces lightly polished and the moving parts treated to a coat of DSX high pressure lubricant which is applied by rubbing in.

The stock was looking incredibly grim, the original brown lacquer was chipped and the forend knocked around on the front right hand side so no prizes for guessing what this rifle has been used for in the past. Removing such a finish is never easy as it tends to resist chemical strippers even when the surface has been broken down so it was completely stripped the old fashioned way with scraping, sandpaper and wire wool to reveal Beech wood. The surface was treated with a mix of stains to darken it up, followed by a light coat of sander sealer with oil across the top applied with wire wool. A light wax finished everything off. We use a coloured wax and I added another coat this morning which has darkened it up a tad more, a few more coats and it will look good.

The barrel as mentioned before was the full length so it was chopped to 12.5″ and screw cut 1/2″ UNF and crowned ready to accept the sound moderator. The machined parts were treated to cold blue to finish it off. 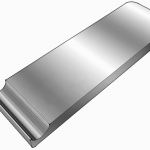 The rifle was assembled which is straight forward enough with the trigger and guard held in place with a single push out pin. Care is needed with the return spring as it is easy to kink it and a small tool is required to get things right. A spring steel tool would have come with the rifle originally however this was missing, I have taken some dimensions and will machine something along the lines of this image. Having thought about it a bit more a register in on the curved side would help to ensure the spring is at the correct height as the bolt is inserted, it should save a lot of fumbling and potential damage to the spring.

This is the finished job and very well done to Scott and the Viking for turning a battered old Anschütz 520 into this very usable rifle. The sound moderator was a spare in the Armoury, the ‘scope is an original Simmons 2.5-10X and the rings are steel Hilver and are the most expensive part of the build 🙂

I always find the bolt handle awkward to get to on the 520/525 especially with gloved hands as the gap between the case deflector and handle is small, I am tempted to machine a new longer straight bolt handle although care will be needed to ensure the rifle still cycles due to a change of weight, I could also remove the deflector however I do like the idea of the brass being pushed down when ejected.

The original pressure formed chequering is not great, it was difficult to clean and some detail has been lost. I am tempted to remove it and give it a stippled/textured finish, alternatively I could just get out and shoot it for what it is, a great little semi-auto rifle.

We have to zero and test fire a Steyr later today so the 520 will come with us for initial zero at 25m and then out to 100m on the tunnel range. I like my Rimfire rifles to be zeroed at around 70m and then either hold high or low dependant on the target distance.

12 Replies to “The Anschütz Semi-Automatic Rifle”