I had an interesting discussion about the venerable BSA Martini International this morning, this was the first model of rimfire rifle I ever shot and it was handed to me and described as a Martini International and that is the name that has stuck in my mind ever since. Yes they are falling blocks however they will always be a Martini action.

Sadly as time passed the Martini International fell from favour and at one point they could be picked up for virtually nothing from schools and clubs and they were often found languishing in the back of cabinets and armouries, then one day small bore Bench rest came to the UK and people started looking for heavy accurate small bore target rifles to press into use as a suitable rifle and the Martini International found a new lease of life.

Of course such rifles do need some work, they were traditionally equipped with open target sights and they flop around when supported on a front bag so a front bag rider is required, a suitable bracket for the ‘scope and rear bag rider for the really serious shooter aspiring to Bench rest

This is a part conversion of a BSA in that it has the front bag rider fitted and the ‘scope bracket however the owner has not opted for the rear rider at this stage. 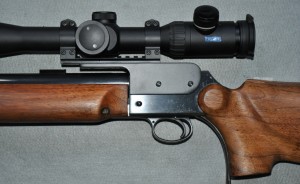 The good thing about starting off with .22LR Bench rest is you do not need a ‘scope capable of dealing with magnum ammunition however it does need to be capable of focussing at 25m or less and this particular Hawke will apparently parallax down to 10m.

When building a bracket for the International it is important to take loading and ejection into account and once the bracket was machined and secured in place with the original taper head sight screws it was time to load and eject to confirm access. The dummy round went in without problems and when the lever was pushed forward the round was ejected.

Actually it was ejected with so much force it flew of across the workshop and into an open cardboard box which did make me smile. When we  were shooting club rifles I knew exactly which ones had the strongest ejectors and I would grab one out of the rack and head to the left hand side of the firing point. A firm flick of the wrist and the spent case would arc out to the right, often clearing the shooter directly to my side before bouncing onto the unsuspecting shooter two lanes up.

Well I was young and it amused me…. 🙂

So here is the finished rifle, now back in the capable hands of the owner. He had assured me just leaving everything in self colour as it was would be OK however I thought a coat of black would enhance the image. I will Cerakote everything when he he has a spare couple of days to leave it with us.

Yesterday afternoon saw us down the range testing ammunition and confirming zero on a couple of rifles and I was surprised at just how quickly it got dark, we are usually in the workshop so we tend not to notice when it gets dark other than Friday afternoons at the range. It was also cold, being a couple of hundred metres from the East coast of Lincolnshire does not help things.

It looks Winter is approaching, I was huddled up in bed last night listening to the wind, at one point it sounded like someone was throwing handfuls of small pebbles at the bedroom window, that was the rain. I hauled out my Kindle and checked the weather, apparently it was 1C with a Real feel of -9C with the wind and snow was due to start in 43 minutes. We woke to a bitingly cold and clear morning with no sign of snow so I guess someone else go it. This is out first winter at the Chapel so it is difficult to know what to expect, no doubt we will have a couple of cold weeks before Spring.

44 Replies to “The BSA Martini International”