We ran a mini comparative on four different kinds of cleaning agent earlier this month to see how they compared. The test was simple, coat sets of identical make bullets pre-weighed to two decimal places in four different makes of copper cleaner and record the results. A simple test however deep down I knew it was never going to be enough so this is the result of a ten product/ten day test. 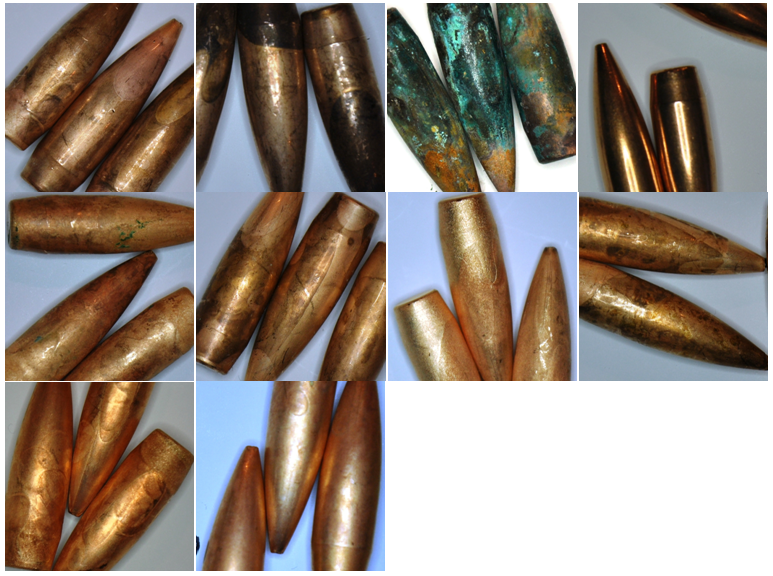 Interesting stuff eh? Well hopefully so with some background. First though I have to say now I do not know the final results yet, let me explain some more.

As a reminder, the reason for the test is I was asked if I would be interested in acting as an outlet for a new UK produced cleaning product and before I was truly going to commit there were a few things to settle. Was it UK produced, did it work and would we put the SHED name to it, anyway back to the test.

Ten groups of three 155 grain SMK’s were segregated into matched sets weighed to two decimal places and degreased in acetone, then ten containers had an equal amount of solvent added to each container, this operation was carried out by the Viking who numbered and noted separately by number 1-10 what was in each container. I had no idea what was in each container however two of them obviously had foam in them so that narrowed those two down somewhat. Just prior to adding the bullets I tested and noted the pH of the contents of each container, the bullets were then added, the lids closed and the contents agitated, the containers were opened and then agitated every four waking hours and photographed periodically.

At the end of the ten day period the bullets were removed from the containers, washed by hand in hot soapy water, followed by acetone then dried and photographed and that is the first picture in this post. The bullets are numbered L-R top row first with top L being #1 etc.

Next stage is to weigh the bullets in the same environment as before and this will take place over the next day or two. I will update this post with the results.

Firstly the products revealed, with a short code identifier and the pH where 1 is Acidic and 14 is Alkaline with a pH7 being neutral.

Now the results in table form.The weight loss is recorded in grains and is on a per bullet basis 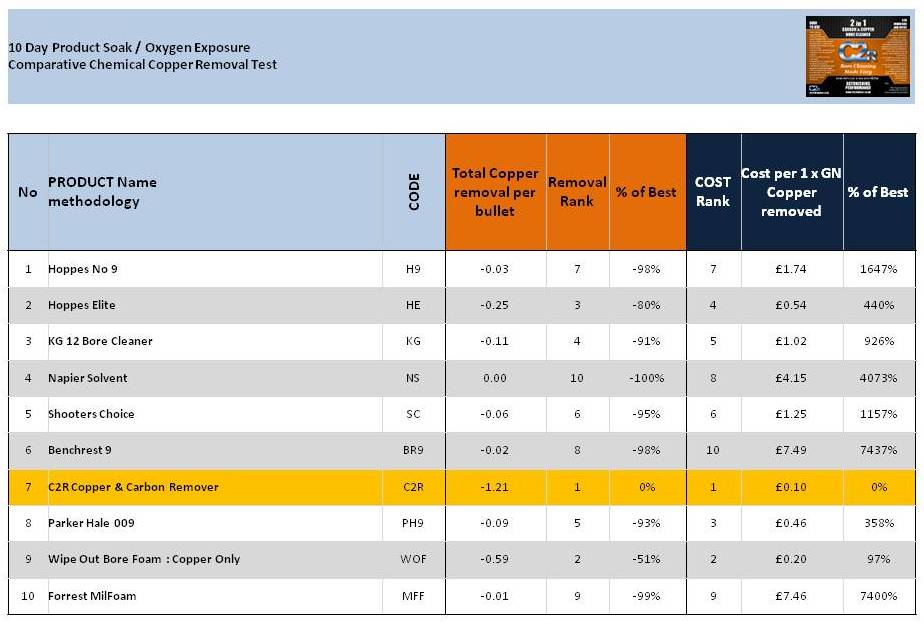 The amount of copper removed in grains from the test groups of bullets, remember these were sets of three SMK 155’s and this gives a good indication of the effectiveness of the products. The scale on the left is grains and with products in order 1-10 along the bottom, in this graph more is better as it means the product removed more grains of copper 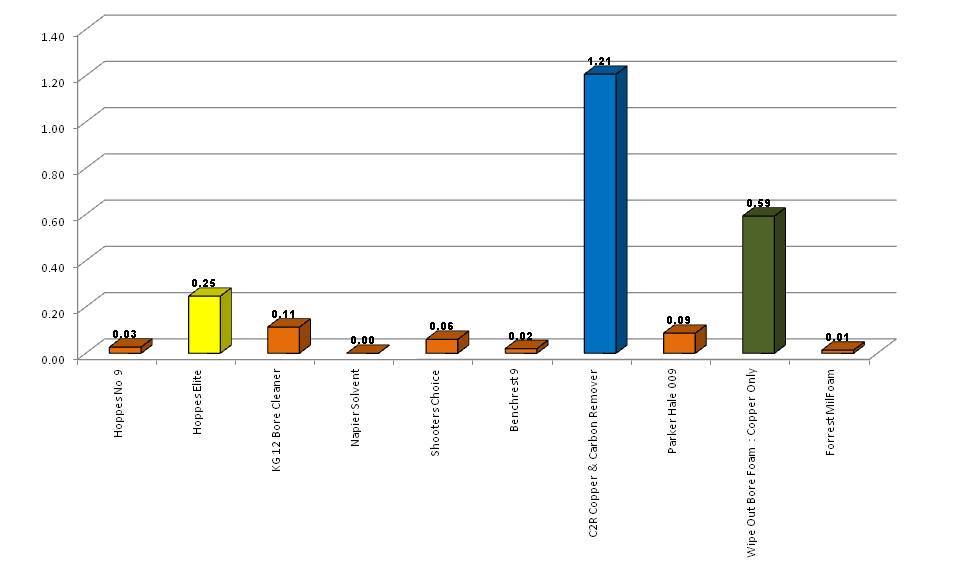 Now a comparison of the approximate cost of cleaning solvent to remove 1 grain of copper fouling from the barrel, the scale on the left is GBP with products in order 1-10 along the bottom, in this graph less is better as it means the product cost is less for each grain of copper removed. 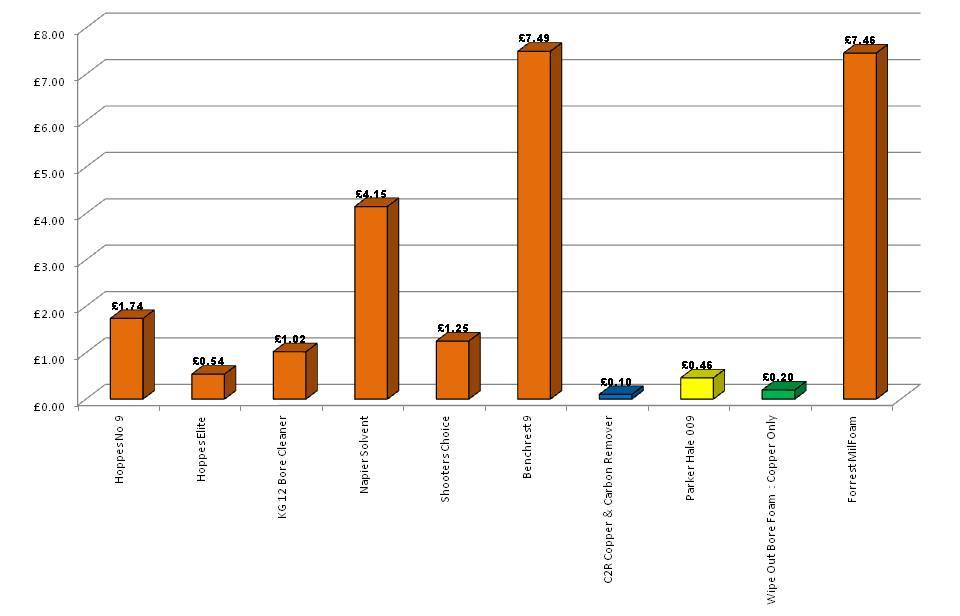 So what did we learn from this test?

The first thing that springs to mind is what exactly are some of the products supposed to do? I get the impression one of them is rather good at preserving bullets as opposed to stripping copper, one of them, well I certainly would not get it on my hands, and yes the product we were testing came out tops despite our utmost to be totally unbiased, so are the Viking and I convinced of the worth of the product? The easy answer is very much so. I have sat down and cleaned maybe a dozen rifles over the last few weeks, some were known clean rifles and yet still more came out of them. Others were filthy dirty old service rifles that I simply stuck in a cradle in the corner of the workshop, dosed with the new product and then went back to machining only pausing to swab the bore out when I remembered or needed a break. At every stage it has exceeded my expectations and meanwhile others have been reporting back with nothing less than glowing reports. The product strips copper, strips carbon, seemed to get under the lead fouling on one rifle and left the bore of my P14 shinier than I have ever seen it.

I am 100% convinced now however I have a cunning plan for one more test. We are going to take the top 5 products from both tests, soak for 24 hours and weigh to see if any one product is especially effective during this first period.

Then to try and replicate the process of swabbing out which adds some form of mechanical abrasion (At no stage in any of my cleaning have I used a brush) I will drop 3 weighed bullets into individual containers with measured doses of product, add half a dozen patches, seal the containers up and bung them in a tumbler for a few hours to vaguely simulate the process of swabbing out with a clean patch, the idea being the rattling around with soaked patches will go some way to replicating a patch being passed through a fouled barrel. What will it show us? I truthfully have no idea however I am sure it will be interesting.

I nearly forgot, the name of the new product? C2R